This article, updated by Dr Wallace Brownlee, discusses how to make a diagnosis of multiple sclerosis, including using the McDonald criteria, key clinical features and how to manage the condition.

Multiple sclerosis (MS) is the most common cause of progressive neurological disability affecting young people, with an estimated 100,000 patients in the UK and at least 2.5m worldwide.

Women are affected approximately three times as frequently as men, with a median age of onset around 30 years, although it may also affect children and middle-aged adults.

The cause remains unknown, but is thought to be multifactorial, with genetic and environmental factors contributing to the risk of disease.

Having a first-degree relative with MS increases an individual's risk to two to three per 100.

The strongest genetic risk of MS is conferred by the HLA DRB1 1501 allele, which increases the risk of MS three fold, and more in homozygous carriers.

Large international consortia have been established to investigate the genetic determinants of MS. They have identified a growing number of loci associated with increased risk of MS.

Most of the genetic loci associated with susceptibility to MS are implicated with immune function and a shared with a number of autoimmune diseases.1 These findings confirm the widely held view that MS is primarily an autoimmune rather than neurodegenerative illness.

The incidence of MS is lowest near the equator and increases with increasing latitude in both hemispheres (a phenomenon known as the north-south gradient). It has been demonstrated that people who migrate between areas of high and low risk for MS are more likely to adopt the level of risk for their new country if they move before their early teens.2 This has suggested that environmental factors acting in early life may also be involved.

Disease course classifications in MS have recently been updated.1 MS is classified as being either relapsing or progressive:

RRMS is the most common presenting form, affecting about 85-90% of people. It is characterised by attacks of new or worsening neurological signs and symptoms (relapses), followed by improvement and periods of stability (remission), without progression of disability between attacks.

Common presentations of MS include acute optic neuritis, double vision and sensory symptoms.2 A first episode of CNS demyelination in a person without previous neurological symptoms is referred to as a clinically isolated syndrome (CIS).

Over time many people with RRMS transition to SPMS with gradual progression of disability over time with or without relapses.

In PPMS, level of disability slowly worsens from the outset. PPMS affects men and women equally and often presents at an older age than RRMS (mean age at onset is 40 years), usually with a progressive myelopathy.

With the use of MRI to investigate unrelated problems (e.g. headache, sinus disease) people are now increasingly recognised with subclinical or pre-clinical MS with evidence of MRI abnormalities suggestive of demyelination but no symptoms. This situation is referred to as the radiologically isolated syndrome (RIS).2

There is no one diagnostic test for MS. However, the diagnosis is dependent on demonstrating dissemination of CNS lesions in time and space.

Historically this was on the basis of clinical symptoms and signs alone (requiring two or more attacks) with paraclinical evidence such as MRI scans, CSF examination and evoked responses supporting the diagnosis.

The diagnostic criteria for MS were revised in 2010, allowing the use of MRI to provide evidence for dissemination in space and time, including in patients with a single attack (the clinically isolated syndrome).4

Use of the revised McDonald criteria (see table 1) has resulted in earlier diagnosis of MS, which potentially allows for the earlier initiation of counselling and treatment for patients.3 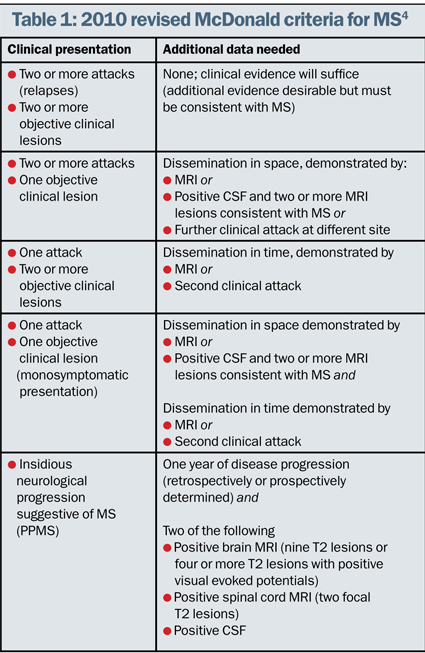 Patients with MS can present in a wide variety of ways, depending on which parts of the brain and spine are affected by the condition (see box 1).

It is also recognised that for every clinical presentation, five to 10 areas of demyelination may have occurred without causing any symptoms.

Relapses are likened to the tip of the iceberg, with many CNS lesions occurring without clinical symptoms.

Treatment can be complicated because of variable symptoms, unpredictable relapses and the differing disease course. Access to a multidisciplinary team with expertise in the management of MS is crucial.

National guidelines in the UK5,6 stress the importance of early referral to MS nurses and the provision of appropriate information and support, such as that provided by the MS Society and the MS Trust.7,8

Treatment of MS began to change in the 1990s with the introduction of beta-interferons and glatiramer acetate. Injectables reduced relapse rates by about 30% and reduced MRI brain lesions by up to 70%.9

Since then, there has been significant development in drugs to treat RRMS with increasing efficacy in reducing relapses, new MRI lesions and rates of brain atrophy.

There are currently more than 10 treatments licensed for RRMS, with several awaiting regulatory approval and others in late-stage development.

Neurologists treating MS are becoming increasingly aggressive in their approach, with the aim being to customise disease-modifying treatment for each patient. The aim is to stop all disease activity, not just clinical relapse, but also MRI measures of lesion load and atrophy. This is known as treating to no evidence of disease activity or NEDA.10

When choosing treatment for a patient, there are many considerations to address. These include the level of MS activity - frequency and severity of relapses, MRI lesion load and location, preferred method and frequency of administration, monitoring requirements, the desire for pregnancy, the patient's lifestyle and levels of compliance and adherence, and tolerability and safety.

Resources are available for patients to aid decision making through discussions with specialist nurses.7,8,11

Disease-modifying treatments (see box 2) are increasingly effective in reducing relapses and possibly delaying progression if started early. But, for those patients whose MS is in an established progressive course, there are as yet no effective treatments (treatments for progressive MS are in late-stage development).5

In all patients, symptomatic treatment for ambulatory problems, bladder and bowel disturbance, pain and fatigue is important to improve quality of life.

A number of studies have investigated the effect of MS on life expectancy.12 Overall, they suggest it is shortened by five to 10 years. Many of these studies, however, were performed before disease-modifying treatments became available.

It is hoped that with more widespread use of these treatments and other advances in management, this difference will decrease.

Although disease-modifying treatments can significantly reduce relapses, when these do occur, they can cause significant disability and distress, so urgent assessment and treatment are required.

Many centres provide a relapse clinic, with rapid assessment by a multidisciplinary team.

If causes of deterioration or new symptoms can be excluded (intercurrent infection is a common cause), treatment with steroids may be considered.

One trial has shown no difference in efficacy between oral or IV methylprednisolone. A common regimen is methylprednisolone 500mg for five days. Longer courses, or use of more than two courses per year, are not advised, due to the risk of side-effects such as osteoporosis.13

CH, a 25-year-old, single, self-employed man, works as a joiner. He was born in Inverness, Scotland, and has no known family history of MS.

He presented to ophthalmology in 2013 with left sixth nerve impairment causing double vision, which was treated with prisms. An MRI brain scan showed changes consistent with demyelination.

CH was seen in the MS clinic in 2014. The only sign on examination was limitation of left eye abduction, which was improving. An explanation of a clinically isolated syndrome was given and he was advised that MS would be diagnosed if he developed new clinical signs or symptoms (apart from left sixth nerve lesion) or if repeat MRI showed new demyelinating lesions (i.e. dissemination in time).

The repeat MRI brain showed two new brain lesions, including one lesion that showed enhancement after the administration of gadolinium.

Following the MRI he was seen for review in the MS clinic. He reported a two week history of numbness and weakness in the right hand accompanied by Lhermitte’s symptom (brief electric-shock like sensation on neck flexion). He also reported urinary urgency.

On examination he had weakness and loss of sensation in the right hand and forearm. The reflexes were pathologically brisk in both legs with extensor plantar responses.

On the basis of these lesions and the new clinical signs, a diagnosis of MS was made.

His MS was classified as highly-active RRMS and he was offered disease-modifying treatment.

CH asked for time to think about the treatment options, including a monoclonal antibody treatment with natalizumab or alemtuzumab. He was given information provided by the MS Society and the MS Trust.

Given the new disabling symptoms, he was treated with five days of 500mg oral methylprednisolone. His John Cunnningham virus (JCV) status was tested.

His JCV result showed he had been exposed to the virus. This meant he was at higher risk of developing progressive multifocal leucoencephalopathy (PML) on natalizumab. After discussion he started treatment with alemtuzumab with monthly blood test monitoring to detect secondary autoimmune complications such as thyroid disease and immune thrombocytopenic purpura (ITP).

This is an updated version of an article that was first published in July 2014.