GPs face chaos as £116m in MPIG funding is redistributed. Nick Bostock looks at why the changes have hit practices so hard.

'There will be groups of patients who will not have access to general practice,' says Londonwide LMCs medical director Dr Tony Grewal. 'We are in trouble - not just GPs, but patients.'

When health secretary Jeremy Hunt announced that MPIG funding would be withdrawn as part of the imposed 2013/14 GP contract settlement, LMCs began to examine how practices would be affected.

They quickly discovered that some would struggle to survive.

'When we first realised the impact of MPIG removal on some practices, we looked for a pattern,' says Dr Grewal.

Were the worst-hit practices paying too much for premises? Were they overpaying staff, or even overstaffed - and if so, what could they do about it?

But there was no obvious logic. 'That was our biggest worry,' says Dr Grewal. 'The big losers are not those delivering poor care or who are inefficient. They are not practices who deserve to lose out.' 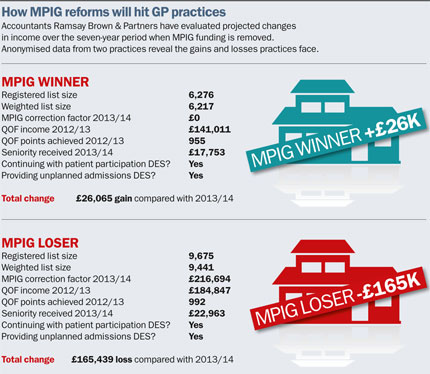 While one practice will see its total funding per patient rise by almost £11 over the seven-year period when MPIG is scrapped, at the other end of the spectrum, practices will lose up to £32 per patient.

For the worst-hit practice, a tiny surgery with a list size less than one-third of the national average, a projected £53,000 annual loss by 2021 is likely to be catastrophic.

A total of 16 practices in the 214 assessed by Ramsay Brown (7.5%) stand to lose more than £10 per patient - a severe challenge to their future.

So why are these practices losing out and is the removal of MPIG - part of a drive to establish more equitable funding in primary care - moving money in the right direction?

It is widely accepted that as things stand, the variation in funding between practices is too great. Wessex LMCs chief executive Dr Nigel Watson says: 'The range at the moment is £52 to £130 per patient. The gap is beyond what you can say is due to workload.'

The Carr-Hill formula, which defines the level of core funding - or global sum - a practice receives, was designed precisely to reward workload.

Its inventor, Professor Roy Carr-Hill, assessed the available evidence in 2003, identified age as the primary driver of workload in primary care, and built his formula around that.

There has been steady debate since the formula came into effect over whether other factors should be given greater weighting.

So is stripping away historical funding anomalies and moving to a position where a greater share of GP practice funding is delivered through a workload-based formula a step towards fairness?

The problem, says Dr Vautrey, is that the formula remains underfunded. 'There's not enough money in the formula to make it work.'

The range of practices that needed the top-up was broad.

'There is a mixed picture,' says Dr Vautrey. 'Practices that would have had deprivation payments before 2004 had that factored in to MPIG - some practices received significant sums based on their Jarman index. They will now be losing out.

'For practices in rural areas - individual health authorities may have preferentially resourced some practices, to ensure they continued to provide services in areas it was hard to recruit to.' Other practices, he explains, invested more in staffing, taking on extra practice nurses and even counsellors.

'All those staff salaries would have contributed to their potential MPIG correction factor - and the loss of each of these income streams will have an impact on practices' ability to maintain services now.'

Dr Bailey says practices with high weighted lists are more likely to gain from the MPIG overhaul - which would suggest money moving to where it is needed.

However, he points out: 'We have practices with high weighted lists, in deprived areas, which are losing out. Some practices that were doing more, providing more, managed to secure extra funding.

'There will be practices that did a good job for patients in terms of getting in funding 10 to 15 years ago that will lose it now - this is anti- entrepreneurial.'

Meanwhile, since the 2004 GP contract, practices reliant on MPIG have seen far lower income growth than non-MPIG practices because of the vagaries of complex funding distribution methods meant to erode reliance on top-ups. Ideally, says Dr Vautrey, 'we wouldn't start from here'.

'But you have to take history into account,' he argues. 'And the historical provision of services. NHS England hasn't done that.'

GPs have called for the MPIG redistribution to stop, and Dr Vautrey says that at the very least it should slow down. 'With financial reform, you usually make small changes - not the big bang approach being adopted for general practice,' he says.

Another key factor the movement away from historical funding fails to recognise is that not all practices are providing identical services.

'In my practice, we do 38 hours of phlebotomy a week,' says Dr Watson. 'A neighbouring practice sends them to hospital, but that is not reflected in our funding.

'We provide the service because patients have to travel seven miles to the nearest hospital. It's difficult to stop - where does the patient go? '

Although concrete financial support from NHS England for practices hit hard by MPIG losses has yet to materialise, a statement on plans to help these practices suggests it recognises that historical factors may affect the funding they need.

An NHS England spokeswoman said talks with practices struggling with MPIG losses focused on 'the types of services offered by the practice and how these services may have developed in response to the particular characteristics of the population served'.

Despite the devastating impact the financial 'big bang' looks likely to have on practices over the coming seven years, Dr Vautrey says the end of the process may provide an opportunity for GPs - those still standing, anyway - to address the kind of problem Dr Watson describes.

By 2021, all practices should be receiving funding on an equal basis. At that stage, practices can demand extra funding for anything they believe is outside the 'core offer' that general practice should provide.

'We have never been keen to define core services - but we can define what is over and above the standard contract,' says Dr Vautrey.

GPs will then need to be 'business-minded' and 'look hard at services they are not paid for'. 'They can invite the CCG to fund them or stop providing them,' says Dr Vautrey.

The £325m in 'premium' PMS funding could help to fund these extra services in future, he adds.

'You wouldn't expect a foundation trust hospital to do work it wasn't paid for,' says Dr Vautrey.

As the NHS funding shake-up bites, practices may need a similar hard-headed approach to survive.

NHS England has promised to deliver thousands of pounds in missing payments to GP...

A five-year freeze on the pensions lifetime allowance in the government's 2021 budget...

Chancellor Rishi Sunak has confirmed a five-year freeze on the pension lifetime allowance...

Health secretary Matt Hancock has thanked GPs for their ‘monumental effort’ in delivering...