The role of methadone in addiction therapy A controversial treatment for heroin addiction. By Dr Matthew Young

Methadone was developed in Germany in the 1930s in an attempt to find a reliable source of opiates.

It must be one of the most widely researched pharmaceutical products, but it remains controversial.

Patients will often be wary of methadone because it is addictive, saying that they 'don't want to develop another habit', but it is really just a long-acting form of heroin.

As a substitute for heroin, methadone has some major advantages.

First, methadone only has to be taken once a day; its half-life is 24 hours.

Second, it is orally active. Most oral opiates have a high first-pass metabolism in the liver and relatively little is absorbed into the bloodstream. For example, 40-90% of an oral dose of methadone reaches the bloodstream, compared to 20-40% of oral morphine. This means patients do not have to smoke or inject heroin to achieve high blood levels, with the attendant health risks, such as chronic lung disease, blood-borne viruses, DVT or bacterial endocarditis.

Third, methadone is clean - it is a pharmaceutical drug. Street heroin is known as 'brown' because of the adulterants that are mixed with it, whereas pure diamorphine is white. Recently, cases of tetanus and anthrax have been seen in heroin injectors, as a result of adulteration.

Most heroin-dependent patients want to stop using because it has taken over their lives.

They have to use three or four times a day. They have to find the money to buy drugs, perhaps by shoplifting or sex work. If they attempt to stop using heroin ('going cold turkey'), they will experience symptoms such as bone and muscle pain, stomach cramps, diarrhoea, chills and sweats, and palpitations, their eyes and nose will run and they will vomit. 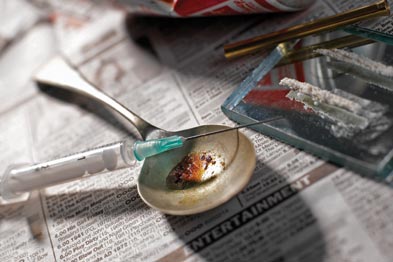 Risks of heroin include luncg disease and DVT

Substituting methadone for heroin allows patients to make changes to their lifestyle. However, methadone is an opiate and needs to be prescribed with care. The Orange Book1 provides clear advice on prescribing for substance misusers.

Before methadone is prescribed, the patient needs to be carefully assessed. A drug history is important, to find out what and how they are using, how often, how much, for how long and what happens if they do not use.

If patients are addicted to a drug, they will take it daily with increasing tolerance and experience withdrawal symptoms if they stop. The drug history needs to include all drugs, illicit and legal, and alcohol. A more general history, such as past treatments, blood-borne virus screening and whether the patient is pregnant, is also important.

Examination, such as looking at injection sites, may also be appropriate.

On-site testing for illicit drugs before prescribing is critical. This could include all drugs that may be abused, but must include a test specific for heroin and methadone (and buprenorphine if appropriate).

The test could be an oral fluid swab or a urine test, and should be done as close to the time of prescribing as possible (I would suggest within 24 hours of issuing a prescription). Confirmatory testing by a pathology laboratory should also be undertaken.

If the patient is to be prescribed methadone or buprenorphine, their test specimens should consistently show heroin.

The RCGP has produced guidance about prescribing methadone and buprenorphine.2 If in doubt, seek advice from an experienced practitioner or the local drug and alcohol team. Do not prescribe in haste.

Patients do not die from opiate withdrawal, but they do die from an overdose of methadone.

Start on a low dose and increase it slowly. The Orange Book advises that the starting dose of methadone should be 30mg or less, especially if the patient has low tolerance. The dose can then be increased by up to a maximum of 30mg in a week.

However, methadone has a long half-life and a steady plasma level takes five days to achieve. If you increase the dose more frequently, the methadone may accumulate and result in an overdose.

The optimal dose of methadone is 60-120mg, preferably above 90mg. This cannot be achieved quickly.

Only prescribe oral methadone mixture, 1mg per 1ml. There are stronger concentrations, but these are more likely to cause confusion in prescribing and dispensing, and carry a much greater risk if passed on to another person by the patient.

All patients should be started on daily supervised consumption. This is not punitive, but ensures the patient takes the correct dose every day.

This allows the patient to establish a different pattern of behaviour and the pharmacist can also decline to dispense the methadone if the patient is intoxicated on other drugs.

If the patient relapses into using other drugs or alcohol, they can be returned to supervised consumption to ensure their safety.

Methadone is only a pharmaceutical product. Patients also need to be motivated to change their lifestyle. This takes a lot of work and may mean losing drug-using 'friends', moving house, finding a job and making contact with family. This requires appropriate counselling, encouraging the patient to change.

One study of drug users in Edinburgh found that some continued to use heroin a couple of times a week for many years, despite starting on methadone.3 The methadone keeps the patient well, but addiction to heroin is a very hard habit to break.

The division between methadone maintenance and detoxification is therefore a false boundary.

The aim is to stop the patient using illicit drugs which cause harm.

By breaking the cycle of drug misuse, the patient is enabled to change their lifestyle.

If patients continue to use other drugs while on methadone, detoxifying from the methadone is likely to mean they will have to continue using heroin.

If you prescribe a higher dose of methadone, it is more likely they will stop using other drugs 'on top'. The patient can then decide if and when to stop the methadone. Likewise, detoxification does not mean recovery, because premature detoxification may lead to relapse.

2. RCGP. Guidance for the use of substitute prescribing in the treatment of opioid dependence in primary care. London, RCGP, 2011.

A man has been charged with assault after four members of staff at a GP surgery in...

General practice in Cornwall 'on the brink of crisis', says LMC

General practice in Cornwall is 'on the brink of a crisis' and may not cope this...

Flu vaccine deliveries to start from this week, supplier confirms