Dr Jon Rees presents an overview of the diagnosis and management of chronic prostatitis.

Chronic prostatitis (CP) or chronic pelvic pain syndrome (CPPS) affects an estimated 30-50% of men at some point. It can affect men of all ages, but has a peak prevalence at 35-50 years.

Although some symptoms originate from the prostate, many are generated by other structures or by neuropathic mechanisms.1

History-taking should focus on the symptom domains listed in box 1. 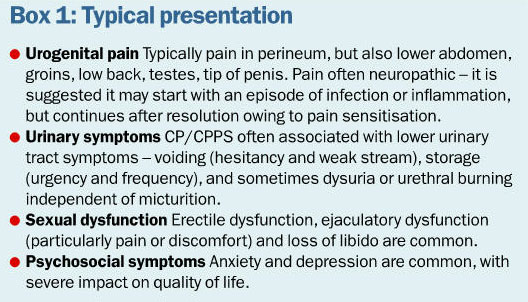 Patients should also be assessed for the psychosocial impact of their symptoms, in which case the patient health (PHQ-9) or generalised anxiety disorder (GAD-7) questionnaires may be useful.

Examination is aimed at spotting the signs of CP/CPPS and excluding other significant pathology. Many patients have urinary symptoms, so examination of the abdomen and external genitalia should be performed, as recommended by NICE.2

A rectal examination is mandatory - the prostate is often tender on palpation. This also allows the assessment of the muscles of the pelvic floor for tenderness and ability to relax and contract.

To exclude infection, urine dipstick and/or microscopy are essential. An STI screen should be considered in sexually active men.

To exclude prostate cancer, PSA testing, after counselling, should be considered in cases of abnormal prostate on rectal examination, patient concern about cancer, or symptoms suggestive of bladder outlet obstruction secondary to benign prostatic enlargement.

PSA may be falsely elevated in active prostatitis, so testing should be avoided at such a time, if possible, or results interpreted with caution.

To establish the diagnosis of CP/CPPS, the patient should have a history of persistent or recurrent symptoms, with the absence of other urogenital pathology, for a minimum of three out of the past six months.

However, symptoms can fluctuate and the diagnosis is often suspected after a shorter duration. There is no gold standard for definitive diagnosis; it is typically based on the history and the exclusion of other causes.

Despite widespread use of antibiotics in CP/CPPS, the evidence base for their use is relatively weak.

However, antimicrobials may have a moderate effect and should be considered as an initial option (see figure 1).

Urinary symptoms should be managed according to NICE guidelines.2 Evidence suggests alpha-blockers may have a modest effect on total, urinary symptom, pain and quality of life scores and should be considered as an initial option in men with significant voiding symptoms.

Sexual symptoms, particularly erectile and ejaculatory dysfunction, should be managed according to British Society for Sexual Medicine (BSSM) guidance.3

In early-stage CP/CPPS, regular paracetamol may be offered as analgesia. NSAIDs should only be offered short-term to patients in the early stages of CP/CPPS whose symptoms are suspected to be due to an inflammatory process, or those judged to be having an inflammatory flare.

NSAIDs should be stopped within four to six weeks if ineffective.

Opioids should be avoided, because they are usually ineffective and carry a risk of dependency. If the pain is considered to be neuropathic, treatment with a gabapentinoid (gabapentin), a tricyclic antidepressant (amitriptyline) or an SNRI (duloxetine) is warranted.

Use of 5-alpha reductase inhibitors and phosphodiesterase type 5 inhibitors, such as tadalafil, has been proposed, but there is no evidence base for this indication at present.

Phytotherapy, including rye pollen extract and the bioflavonoid quercetin, shows some evidence of a modest beneficial effect and may be considered in refractory cases.

Early referral to specialist services is suggested for men with severe symptoms or where there is diagnostic uncertainty. This may be to a urologist with an interest in CP/CPPS, a pain physician or a sexual health clinic.

Refractory cases may be referred, for a multidisciplinary approach incorporating specialist physiotherapy and/or psychological intervention.

3. BSSM. Guidelines on the management of erectile dysfunction.