Some transgender patients report that they feel discriminated against when receiving medical treatment, ranging from delays for gender reassignment surgery to lack of knowledge from the medical profession about the problems they face.1

Relatively few cases about transgender treatment have been notified to the MDU. This might be a reflection of the numbers who consult doctors for transgender advice. Worldwide, approximately one in every 11,500 people is transsexual. 'Trans' or 'transgender' are umbrella terms for all people who cross gender boundaries, including transvestites.1 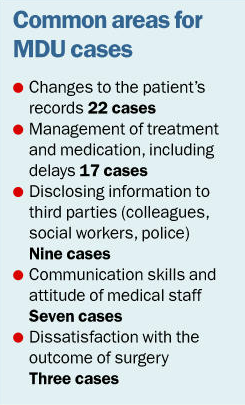 From 2008 to 2012, the MDU learned of 67 complaints, negligence claims and adverse incidents relating to transgender patients, with most cases arising in primary care.

Problems with records were the most common reason for complaint, including patients who wanted their previous gender and all references to their gender reassignment to be deleted from the record.

Patients are entitled to challenge the validity of records and to have factual errors corrected, but medical records need to reflect accurately the treatment and care provided.

An entry should not be amended because the patient objects to it, although it may be possible to add a note to reflect the patient's view. Patients can also ask for certain information to be kept confidential.

In a few cases, GPs were unhappy monitoring or continuing medication to patients having gender reassignment. Treatment may be initiated by specialists, but GPs will often oversee the management of these patients.

If you are unfamiliar with the medication prescribed, you may need to seek advice from specialists before proceeding, because you are responsible for any prescription issued.

When referring transgender patients, you should be careful to disclose that the patient has undergone gender reassignment only when necessary, for example, when making a referral to urology.

It may also be necessary to share confidential information with third parties, such as a social care agency.

It is important that the patient is aware of this and consents, unless it is in the public interest to share information without consent.

You should only disclose the minimum information necessary and take care not to breach another person's confidentiality. 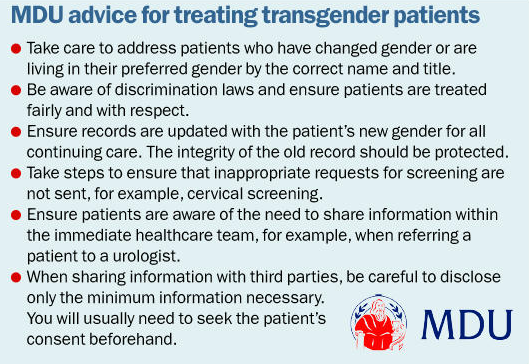 Communication breakdown was an underlying problem in many of the cases. The GMC's Good Medical Practice states that you must treat patients fairly and with respect, whatever their life choices and beliefs. Discrimination laws, such as the Gender Recognition Act 2004, the Sex Discrimination (Gender Reassignment) Regulations 1999 and the Equality Act 2010, also provide legal protection to transgender people.

With understanding, GPs and practice staff can help to ensure that transgender patients feel they are treated fairly and sensitively.

These can be particularly complex problems. For example, in one case, a 17-year-old patient's relative complained when the patient was prescribed female hormones and referred for gender reassignment.

In another case, a patient complained that a GP had mentioned a previous gender reassignment procedure in a referral letter sent to a hospital specialist.