Measles infections are continuing to rise and parents must ensure children have had both MMR jabs before returning to school, the Health Protection Agency (HPA) has said.

Twice as many confirmed cases of measles were recorded in the first six months of 2012 as in the same period in 2011. The HPA said that poor uptake of MMR immunisation may be contributing to the rise in cases.

The HPA said that rubella cases have also risen, with 57 reported between January and June this year, more than the total number of cases occurring in each year since 2002. DH advisors have previously warned that mumps cases can be expected begin to surge from the autumn.

UK MMR uptake levels fell from above 90% to less than 80% (see graph) after a February 1998 Lancet paper by former surgeon Andrew Wakefield claimed the vaccine was linked to the development of autism. 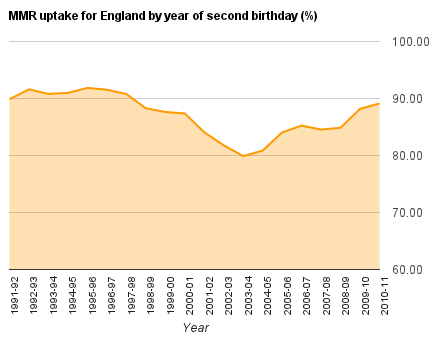 Dr Mary Ramsay, head of immunisation at the HPA, said the continued rise in measles cases was ‘extremely concerning’.

‘Measles can be very serious and parents should understand the risks associated with the infection, which in severe cases can result in death,’ she said.

Although uptake of the MMR has improved in recent years some children do not get vaccinated on time and some older children, who missed out when uptake was lower, have not had a chance to catch-up. Therefore, there are still enough people who are not protected to allow some large outbreaks to occur among unvaccinated individuals.’

She added: ‘It’s vital that children receive both doses of the MMR vaccination and ahead of returning to school after the holidays, we are urging parents to ensure their children have received the two doses, which will provide the best protection against the risks associated with measles, mumps and rubella.

Doctors' leaders have accused the Labour party of 'demonising' GPs after it claimed...