Hundreds of GP practices have merged or closed since NHS England became operational in April 2013. GPonline looks at where changes are happening fastest.

GP leaders have been saying for some time that practice closures are now at record levels, with the blame pinned on rising workload, the dwindling GP workforce and a decline in practice funding over the past decade.

Earlier this week, GPonline analysis of official data from NHS Digital showed that almost one in 10 practices that featured on lists recording numbers of registered patients when NHS England became operational in April 2013 no longer appear in the latest list for July 2017. This suggests these practices have either closed or merged over that period of four years and three months.

Nationwide, the spread of practice closures is fairly even - with 11% of practices closing or merging in the NHS South region, 9% in the North and London regions and 8% in the Midlands and East. By CCG, however, the variation is huge. Some smaller CCGs such as NHS Ashford or NHS Bassetlaw appear to have seen more than half of their practices close or merge, and 29 CCGs have seen more than a quarter of their practices affected.

Map of practice closures/mergers since April 2013 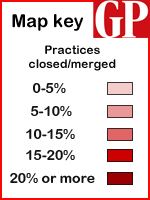 For more than one in three CCGs, the change has been fairly limited - with 5% or fewer of their practices having undergone closure or merger since April 2013.

Explore the interactive map above to find out how CCGs have been affected across the country. CCGs listed on the map are based on April 2013 data, so there are 211 rather than the current figure of 207. CCG numbers changed following mergers around Newcastle and Manchester.

Data obtained from NHS England last year by GPonline suggested that where contracts have been terminated, around a third involve a practice closure, and two thirds a merger or takeover.

The vast majority of trainee doctors have seen their training disrupted or limited...

GP practices across England are facing a significant loss of income as COVID-19 dries...

MPs have raised the prospect of a cap on GP consultations in an investigation into...

GP training: Working remotely as a GP trainee during the pandemic

Dr Zoe Brown was in her first year of GP training and pregnant as lockdown began....