GP practices in some CCGs receive on average almost twice as much funding per weighted patient as those in other parts of the country, official data published this month reveal.

Average funding per patient across all GP practices in England has risen steadily since the first data on payments to general practice - for the 2013/14 financial year - were published by NHS Digital.

Data published this week revealed that average funding per patient for GP practices was £151 for 2016/17 - up from £136.01 in 2013/14. But variation in the average level of funding GP practices receive between CCG areas remains huge, and was roughly unchanged in 2016/17 compared with the previous year.

Map: find out how funding in your CCG compares 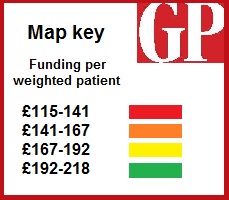 GP leaders have warned that despite a rise in GP funding in 2016/17, overall investment in general practice is failing to keep track with soaring workload.

The BMA has predicted that general practice funding will fall short by £3.4bn in 2020/21 of the 11% share of overall NHS funding the profession needs.

NHS England has promised to deliver thousands of pounds in missing payments to GP...

A five-year freeze on the pensions lifetime allowance in the government's 2021 budget...

Chancellor Rishi Sunak has confirmed a five-year freeze on the pension lifetime allowance...

Health secretary Matt Hancock has thanked GPs for their ‘monumental effort’ in delivering...