Clinical presentations and the latest advice on therapeutics for cutaneous viral warts.

Viral warts are benign skin and mucosal lesions caused by cell proliferations triggered by HPV. HPV is a non-enveloped heat-resistant DNA virus that is widely distributed in humans and animals, and seems to be highly species specific. More than 100 types of HPV have been identified and although some types affect particular areas of the body preferentially, any type of HPV can affect any areas of skin or mucosa.1,2

HPV 1 to 4 and 10 usually cause non-genital viral warts. Condylomata acuminata or benign anogenital warts are typically caused by HPV 6 and 11, which are considered to be low risk for the development of cancers.

The mechanism of malignant transformation is not completely understood, but integration of the virus seems to be important. The immune response to viral warts is both T-cell mediated and innate, with involvement of Toll-like receptors 3 and 9 and production of interferon and TNF. 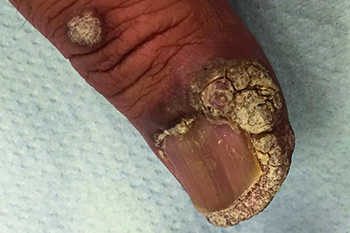 Viral warts affect about 10% of the population, but are particularly common in school-aged children and young adults, in whom prevalence may reach 20%.

Non-genital viral warts affect women and men equally, but they are twice as common in white populations as in Asian or black patients.

HPV is often picked up in swimming pools and gyms where the environment is wet, people may share towels and there is a risk of skin abrasions.

The primary target of papilloma viruses are basal keratinocytes, which are exposed through minor trauma. Perilesional skin often contains HPV and this may explain the high rate of recurrence with viral warts.

Viral warts usually present as rough, hyperkeratotic papules, plaques and nodules on fingers, toes, feet and hands, although they can affect any part of the skin or mucosa. Histologically, viral warts have non-specific features of hyperkeratosis, papillomatosis and acanthosis.

Common warts (verrucae vulgaris), caused by HPV 1, 2, 4 and 7, typically affect the hands, fingers and elbows, presenting as keratotic or warty papules. Common warts may also affect the face, where they often present as fragile, filiform papules.

Plantar warts usually affect the soles of the feet and are typically caused by HPV 1 and 4. Very rarely, verrucous viral wart carcinoma may develop in longstanding viral warts.

Plane warts, which are flat macules on the face, shins and back of the hands, are most common in children. They are usually caused by HPV 3 and 10.

Anogenital warts or condylomata acuminata are usually sexually transmitted and caused by HPV 6 and 11, although they may also be caused by other HPV genotypes. They present as papules and warty lesions affecting the anogenital area, including the glans penis, penile shaft, female external genitalia and less commonly, the cervix.

A flat, warty periungual finger plaque may rarely represent Bowen’s disease (squamous carcinoma in situ) or amelanotic melanoma – the latter may be suspected if there is pigmentation and/or erosion.

Lichen planus lesions may be mistaken for plane warts and poroma for plantar warts. Shaving of a viral wart often shows black dots of thrombosed capillaries, helping to distinguish it from a corn. 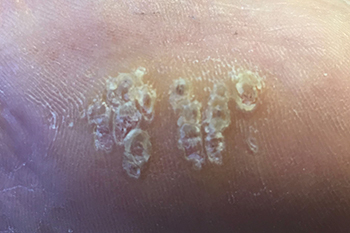 Viral warts are usually diagnosed clinically, based on their appearance. If a verrucous carcinoma is suspected, a deep incisional biopsy may be indicated. Rarely, investigation into immunosuppressive status may be needed if viral warts are persistent without obvious clinical reasons.

In most patients, cutaneous viral warts will resolve without treatment within two years. If the warts are painful, or the patient would like to have them treated, a number of management options are available.

A Cochrane review could not combine data from trials of the following treatments for cutaneous viral warts:

However, in a randomised double blind placebo-controlled clinical trial, 5% imiquimod cream induced complete clearance of genital warts in 50% of patients, compared with 11% for placebo.2 In 12 immunosuppressed patients with viral warts on their hands and feet who had failed standard treatment, a 36% response rate was observed.2

Evidence has emerged that topical immunotherapy with diphencyprone (DCP) can be very effective in the treatment of recalcitrant cutaneous viral warts. DCP is an unlicensed treatment, but has been successfully used to treat alopecia areata in the UK and worldwide for more than 20 years.4

In a study of 60 patients with cutaneous viral warts who had failed to respond to topical salicylic acid and/or cryotherapy, 88% were successfully treated with DCP.5

In another study of 211 patients with recalcitrant cutaneous warts who received topical sensitisation with DCP, complete clearance was observed in 88% of patients.6 Most tolerated the treatment very well. Patients had an average of five treatments over a six-month period. However, few centres in the UK are currently offering this treatment for viral warts.