An overview of skin disorders caused or aggravated by light, including polymorphic light eruption, chronic actinic dermatitis and solar urticaria.

Photodermatology is the study and management of skin disorders induced or aggravated by exposure to light. It encompasses a wide range of conditions mediated through immunological mechanisms, drug or chemical phototoxicity, disorders in DNA repair or the aggravation by light of existing skin disease.

Diagnosis is aided by phototesting using a monochromator, an optical device that disperses light using a prism, enabling clinicians to assess the response of the skin to pathologically relevant wavelengths of light (UVB, UVA and visible light). The range of sensitivity, in combination with a thorough history and examination, can help to establish a diagnosis.

This article considers some of the common photodermatoses, their management and the important differentials to consider.

Polymorphic light eruption (PLE) is the most common photosensitive disorder in the northern hemisphere, with a prevalence of roughly 15% in the UK.

Onset is normally within the first three decades of life, representing a common cause for photosensitivity in childhood. There is a strong female predominance and a significant inherited component, with familial clustering.

Patients report a pruritic eruption occurring on exposed sites a few hours to a few days after exposure, and resolving within a few days to a week provided further exposure is avoided.

Lesion morphology varies between individuals, hence the name polymorphic. Erythematous papules that gradually coalesce (figures 1 and 2) are most commonly reported, but vesicles and plaques are also common. Scale is absent and the rashes resolve without scarring. 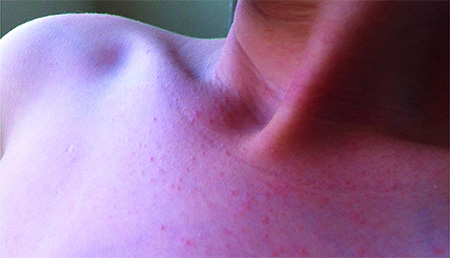 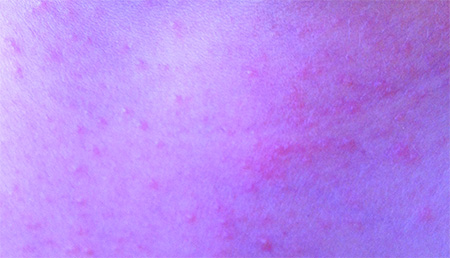 Most commonly, PLE only occurs during travel to hot countries, usually after one to two days of exposure. However, a proportion of individuals will be sensitive enough to flare in the UK spring and summer.

Reported improvement occurs as the summer progresses, owing to the phenomenon of hardening – a physiological process of increased tolerance to UV after repeated exposure. This also accounts for the sparing of repeatedly exposed sites, such as the face and the back of the hands, although in severe cases, these can be affected.

Diagnosis can normally be made through history alone, but in some cases, monochromator testing or provocation with daily UVA over three days to the inner forearm may be necessary.

Differential diagnosis
It is essential to exclude cutaneous lupus erythematosus in all patients with PLE, given that subacute cutaneous lupus may also present with a photosensitive eruption of erythematous papules on exposed sites.

To confuse matters further, PLE is common in patients with lupus erythematosus. It is therefore sensible to screen all patients for lupus (send bloods for ANA, extractable nuclear antigen antibodies and anti-double-stranded DNA antibody). A delayed onset of up to three weeks and a delayed offset in comparison to typical PLE should raise suspicion.

Actinic prurigo is a rare, immune-mediated photodermatosis, often presenting in childhood, with pruritic papules occurring predominantly on exposed sites. Non-exposed sites, such as the buttocks, can also be affected.

Acute episodes may look eczematous or papular and PLE-like. Consider this in patients presenting with PLE-like lesions, but with a prolonged offset and evidence of scarring. Lesions last for weeks to months before resolving to leave scars. HLA-DRB1*0407 is strongly associated with this condition.

Management
This includes photoprotection (avoidance, broad-spectrum sun cream, clothing), gradual exposure (repeated exposure below that which triggers the rash, to harden the skin), prednisolone 25mg once a day for three to five days at the onset of severe rashes while abroad and for those with problems in the UK, desensitisation with narrowband UVB therapy in early spring.

It commonly, but not exclusively, affects older males with a history of chronic sun exposure, but can develop in younger individuals on the background of atopic eczema. Patients present with chronic, often lichenified confluent eczema of the face, neck, forearms and back of the hands (figure 3). There is often a clear cut-off between exposed and covered sites.

Eczema may be present year round, with some deterioration during the summer months. In more sensitive patients, in whom even the weak winter sun is sufficient to provoke eczema, seasonal variation may be lacking. 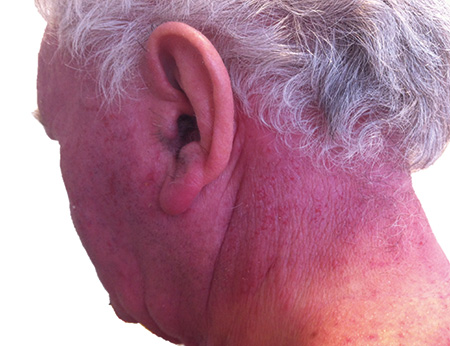 Diagnosis
Investigation of suspected CAD should include phototesting, patch and photopatch testing.

The development of eczema on exposure to low levels of UVB with monochromator testing is diagnostic. In some patients, sensitivity to UVA and visible light may be evident.

A coexistent contact allergy is seen in as many as three-quarters of patients with CAD. Common sensitivities include p-phenylenediamine in hair dye, fragrance mix and sesquiterpene lactone in the UK.1

Roughly 9% of patients may develop an allergy/photocontact dermatitis to one or more chemicals after exposure to UVA (particularly to components of sun cream). This is diagnosed via the exposure of patch test chemicals to low levels of UVA, known as photopatch testing.

Management
Photoprotective clothing and the use of high-factor, broad-spectrum sun creams are essential. Otherwise, the management of CAD is similar to that of endogenous eczema – topical emollients, soap substitutes and steroids in milder cases, with the use of systemic therapies, such as methotrexate, ciclosporin, azathioprine, mycophenolate mofetil and short courses of systemic steroids, in more severe disease.

Psoralen plus UVA phototherapy, conducted in a specialist centre with knowledge of the underlying UV sensitivity range, can be effective.2

Solar urticaria (SU) is a rare physical urticaria thought to occur because of IgE-mediated mast cell degranulation to an as-yet unidentified light-absorbing molecule (a chromophore) in the skin or blood of affected individuals.

Low levels of sunlight induce well-defined areas of erythema, wheeling or flaring on exposed sites (figure 4). The reaction occurs within minutes of exposure and resolves within a few hours provided further exposure is avoided.

As with other forms of urticaria, significant mast cell degranulation can, rarely, lead to hypotension and collapse. Activating wavelengths are most commonly UVA and visible light, but the action spectrums vary (figure 5).

Both drug-induced photosensitivity and erythropoietic protoporphyria (EPP) may present with an immediate onset erythema or swelling on exposed sites.

EPP is a rare form of cutaneous porphyria resulting from inherited mutations in the gene encoding ferrochelatase. It presents with swelling and burning discomfort of the hands, face and sometimes the dorsal aspect of the feet, following exposure to visible violet light. The discomfort lasts for several days before resolving. Subtle linear scars may be present on the back of the hands or the face.

Onset is normally in infancy. Unlike the acute porphyrias, acute neurological attacks and precipitation by medications do not occur in EPP. However, caution should be taken with iron replacement, which may drive haem biosynthesis and lead to elevated protoporphyrin levels.

The most serious complication of EPP is liver failure, which occurs because of the toxic effect of protoporphyrin on the hepatobiliary system and affects about 1% of EPP patients. More commonly, gall stones are recognised in association with EPP.

Diagnosis is made through the demonstration of a raised circulating free protoporphyrin level on blood testing.

Management
Sun protection is targeted to the triggering wavelengths of light. Reflectant sunscreens are needed for visible light sensitivity.

Antihistamines are the first-line systemic treatment. About one-third of patients have an excellent response (often at doses above those licensed by manufacturers), one-third are considered partial responders and one-third have doubtful benefit.3

For those with an inadequate response to antihistamines, ciclosporin, IV immunoglobulin, omalizumab, plasmaphoresis and photodesensitisation (using wavelengths outside the action spectrum) may be useful.

A man has been charged with assault after four members of staff at a GP surgery in...

General practice in Cornwall 'on the brink of crisis', says LMC

General practice in Cornwall is 'on the brink of a crisis' and may not cope this...

Flu vaccine deliveries to start from this week, supplier confirms