A rare but serious cancer that is often only diagnosed at a late stage.

0.5 CPD Credits Click here to take a test on this article and claim a certificate on MIMS Learning

A 74-year-old man attended surgery with a four-month history of a progressive right-sided breast swelling. He complained of burning over his skin and one episode of bloody nipple discharge. He was a type 2 diabetic non-smoker, with no relevant family history.

On examination, the right breast had a retracted pagetoid appearance to the nipple, with a painless hard lump in the underlying skin. His left breast was normal, there were no palpable lymph nodes and his weight was stable.

The patient underwent a prompt right mastectomy with sentinel lymph node biopsy, which was negative for cancer spread. Postoperatively he made a good recovery. He went on to have a staging CT thorax, abdomen and pelvis, a nuclear bone scan and echocardiogram, before discussing systemic chemotherapy and chest wall radiotherapy. He was started on tamoxifen 20mg daily for a minimum of five years. 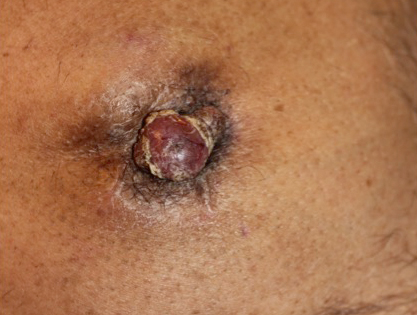 Male breast cancer (MBC) is rare and thought to have a distinct pathophysiological basis of disease.

MBC accounts for 1% of all breast cancer, with about 350 men being diagnosed in the UK per year, compared with 50,000 women.

Symptoms often include a painless lump, nipple discharge or retractions. Lesions are typically invasive and located in the subareolar area with associated lymph node involvement.

Invasive ductal carcinoma is the most common histological subtype, contributing to almost 90% of cases, while other subtypes include Paget’s disease of the nipple, medullary, mucinous, tubular and inflammatory breast carcinoma.

MBC has high rates of hormone receptor expression, with 90% being ER positive. Delayed presentation is common (mean age of breast cancer detection in men is 67 years, compared with 63 years in women) and likely due to reduced male breast awareness, less directed information/education and no male screening programme. This ultimately worsens the prognosis when compared with females.

The MHRA cautioned in 2009 that an association between MBC and long-term finasteride (commonly used for BPH and androgenetic alopecia) cannot be excluded.

The primary treatment of MBC is a modified radical mastectomy with axillary dissection. Tumour size, TNM stage and cell receptor positivity for estrogen, progesterone and HER2 are prognostically important and relevant in deciding whether to commence hormonal or biological therapy.

NICE has produced new revised guidance on suspected cancer. For breast cancer, male and female patients should be referred within two weeks if they are:

GPs should consider a suspected cancer pathway referral in patients:

MBC is increasing in incidence and is often only diagnosed at an advanced stage.