A groundswell of public support for general practice, unprecedented in recent times, has forced the crisis facing GPs to the top of the political agenda as the parties gear up for next year's general election.

As patients and campaigners sign petitions and take to the streets in defence of local practices under threat from the funding and workforce crisis, politicians and officials are under increasing pressure to act.

As GP went to press, NHS officials in London were preparing to reveal details of a financial package of support for the hardest-hit MPIG practices, following lobbying from practices and supporters. GPs had previously been told there was no money available.

GP leaders have said hundreds of practices are at risk from MPIG cuts, not just the 98 outliers identified by NHS England, which face funding cuts of more than £3 per patient.

Local campaigns backing practices have emerged across the country, and MPs across the political spectrum have spoken out to support GPs.

On 6 August, east London Save Our Surgeries (SOS) campaigners will hand in a petition to Downing Street signed by 15,000 people opposed to MPIG cuts. The most high-profile local campaign against the GP funding threat held two marches of several hundred supporters in east London in the space of a month.

Addressing councillors, she said 10 practices in the borough faced combined MPIG losses of £8m. Twelve practices in Hackney, serving 100,000 patients, have been identified as at risk of closure.

Hackney’s cabinet member for health, councillor Jonathan McShane, said the council and mayor would back the SOS campaign.

SOS vice-chairman and president of the Medical Practitioners’ Union (MPU) Dr Ron Singer said the campaign aimed to explain to the public ‘that their surgeries are being put at risk’. The MPU could press the GPC to organise industrial action and seek to spread SOS ‘across London and beyond’, he said.

The east London campaigners collected signatures from more than 15,000 local residents in four weeks for a petition against MPIG cuts. The 38 Degrees campaign group has collected more than 5,600 signatures.

Residents of London’s Chinatown told local media one of the practices is the only one in the area with Chinese-speaking GPs.

In Lancashire, patients are campaigning to defend rural surgeries such as the Slaidburn practice, facing heavy MPIG losses. GPC deputy chairman Dr Richard Vautrey said the campaigns showed the message was ‘starting to get through’ . 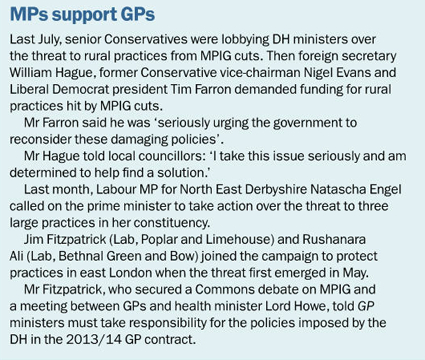 Breast pain in women and men has a variety of possible causes, from prescription...

GPs face a surge in workload over the coming months as the government rolls out the...

Government plans to make face coverings mandatory in shops from 24 July should be...

GPs warned over prescribing beyond their competence as hospitals shift workload

GPs must resist pressure to prescribe medication outside their competence and push...

GPs have been reassured they do not need to follow up COVID-19 tests amid confusion...