Calls to introduce GP appointment charges have been rejected by the profession's leaders, who said it would be 'mistaken and dangerous' step that would destroy patient trust in their doctor.

Wiltshire GP Dr Helena McKeown had proposed a motion at the LMCs annual conference in York calling on the GPC to explore national charging for general practice services.

She said charging a fee for general practice services could help to emphasise to patients the value of GPs.

But while LMC leaders supported part of the motion saying general practice had become 'unsustainable' in its current format, they rejected charging for GP services.

They voted in favour of the UK government defining the services that can and cannot be accessed in the NHS.

The final part of a five-point motion called on GPC 'to explore national charging for general practice services with the UK governments'.

'You do not manage demand by making patients pay - you then get survival of the richest, not treatment of the sickest.'

Dr Buckman said passing the motion would 'appall most of the public and profession'. Patients would see this as 'the final nail in the coffin for the NHS' and GPs would be blamed, he said.

It would also lead GPs to become tax-collectors for the government, he said.

She said the motion was not about charging an upfront fee, but about a charge for some services, for some patients.

'A fee, for some services, to some people, would sustain us, while we build up a workforce who want to join us, and make general practice more attractive than retirement or general practice abroad.'

She said general practice fees could give unhurried consultations and improve access.

Many LMC representatives lined up to give their views on the motion.

Dr Rob Bailey, Cambridgeshire LMC, said NHS was still the envy of other countries because its core values, including that healthcare should be free at the point of delivery and not based on the ability to pay.

Speaking in favour of charging, Dr Lee Salkeld from Avon LMC said that charging patients was 'an important avenue' to consider for increasing primary care funding.

Co-payments would improve care for patients by providing 'better access and longer appointments', he said.

Dr John Grenville from Derby & Derbyshire LMC, said: 'We've got to do something; we've got to look at all the options. If the government is not going to support an NHS based on need, free at the point of access... what is it going to do?'

But Dr David Wrigley from Lancashire Coastal LMC described the motion as 'toxic for our patients and toxic for our NHS'.

He urged GPs attending the conference to 'support our fantastic NHS'.

Speaking after the vote, GPC chairman Dr Chaand Nagpaul said: 'Many GPs are frustrated and concerned about the future of general practice given that many GP practices are struggling from a combination of rising patient demand, falling funding and more work being moved from hospitals into the community.

'In this climate, it is understandable that the LMC conference wanted to debate the need for extra funding for overstretched GP services. But introducing a charge for services would be a tax on illness, hit the most vulnerable the hardest and threaten to undermine the principle of an NHS free at the point of delivery.

'Introducing a financial transaction would undermine the trust between doctor and patient.'

How LMCs voted on charging for appointments: 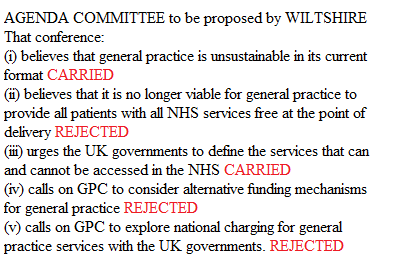