Exclusive: Restrictions on GP minor surgery have cut practice income by up to £32,400 a year, damaged the profession's skill base and wasted millions of pounds, the RCGP has said.

Many skilled primary care surgeons have 'given up' providing services and 'disenfranchised' GPs are now reluctant to train, he said.

Patients are now referred to hospitals for treatment costing up to 19 times as much as GP services. Dr Botting criticised NICE's skin cancer guidance for putting a 'massive rift' between primary and secondary care over minor surgery.

He said its 2006 skin cancer guidance blocked the ability of GPs to remove malignant melanomas or carcinomas. Updated guidance issued in 2010 continues to restrict surgical activity, he added.

'Phenomenal' NHS savings would be possible if primary care was allowed to offer more procedures, he said.

'Many GPs can perform a wide range of minor surgery,' he said. 'However, many patients are referred to secondary care at a considerable cost to the NHS.'

A skin cancer procedure costs from £378 to £1,612 in hospital settings – compared with £87 through the primary care DES tariff. Treating all melanomas and half of non-melanoma skin cancers in primary care could save the NHS at least £57m a year (see graphic). 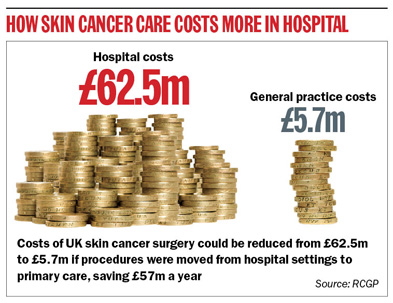 A practice performing nine skin cancer excisions a week could earn up to £32,400 a year. But 'virtually no' such work is now undertaken in primary care, he said.

Dr Paul Charlson, a Yorkshire GPSI in dermatology, said: 'If GPs are taking basal cell carcinomas (BCCs) off people's bodies and we have margin rates as good as anyone else, then why not? I don't know why there is a restriction.'

Primary care surgeons were vital because dermatology services are 'swamped', he added.

The RCGP launched an audit this month to prove GP minor surgery is as safe and effective as procedures carried out in secondary care.

GPC deputy chairman Dr Richard Vautrey backed the audit and said skilled GPs were being prevented from using their training.

A NICE spokeswoman said the 2010 guidance clarified when GPs can remove low-risk BCCs.

This advised how services can be commissioned 'to ensure that the most appropriate healthcare professional treats each BCC'.

The learning module enables you to refresh your knowledge of symptoms and signs,...