Dr Anna Martin tells Siobhan Chan about volunteering in an Ebola treatment centre, and why GPs are ideal for the role

Two months into her first job as a GP in Ealing, west London, Dr Anna Martin realised she had a big favour to ask of the partners at her practice.

As news reports detailed west Africa's efforts to control the Ebola outbreak, she read an article about NHS volunteers and decided to put herself forward.

'I realised, as a GP with five years' medical experience, I couldn't just sit and watch it on TV when I knew I had the skills to help,' she says.

GPs have skills to fight Ebola

So with nine weeks' leave from her practice, Dr Martin prepared to leave for Makeni, Sierra Leone, just as others geared up for Christmas.

Of the 19 volunteers she flew out with, three were GPs: people with the right skill mix, Dr Martin believes.

'GPs are perfectly placed to help in Ebola treatment centres because we deal with people from babies right through to the elderly with multiple comorbidities,' she says.

The treatment centre was like a war zone at times, Dr Martin says. There were four wards - two for patients waiting for test results, one for patients with confirmed Ebola, and a convalescent ward for those who survived the disease. She describes the confirmed ward as 'heartbreaking'.

'I remember once walking in and my heart just sank. Seeing this scene of bedlam - bodies on the floor, bodily fluids everywhere, people crying - you just have to tell yourself to keep it together,' she says.

'I confirmed a woman in her early 20s dead, and her cousin was in the bed opposite, rocking back and forth, wailing. It was unlike anything I've seen before.'

The patients who recovered left the ward through a disinfectant shower and to a chorus of drums and song, adding a paint handprint to the survivor's wall that became a symbol of hope to patients and staff alike. 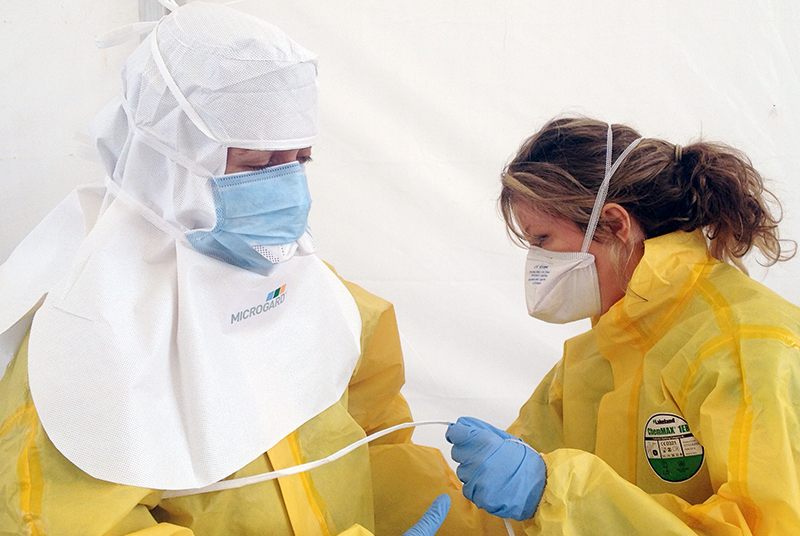 The protective equipment worn by staff was both reassuring and frustrating, Dr Martin says. The suit, apron, mask, gloves and boots were almost unbearably claustrophobic to work in - especially in 30 degsC heat - and the strict 'doffing' procedure was excruciatingly deliberate.

Dr Martin says she could tip the sweat out of her boots at the end of a 45-minute stint in the confirmed ward. Her mask too, would fill up with sweat as she worked - along with tears on difficult days.

The UK team provided support during shifts and welcome distractions on days off. 'The camaraderie was really special - it kept our spirits up. We all found the suffering overwhelming, but after a bad day, humour kept us going.'

The 'real heroes' are staff from the local area, Dr Martin says. She describes a team member who 'didn't dare' tell his family he was working with Ebola patients because of the stigma, instead telling them he was doing his usual job in the hospital. Another nurse had housing problems after her landlord found out where she worked. They also saw colleagues and friends tested, treated, and sometimes dying.

Deployments for Ebola response volunteers last five weeks, but despite the hot, difficult, upsetting conditions, Dr Martin says she would have stayed longer if she could.

'It's the most incredible and heartbreaking experience of my life. I would do it again, and I can't recommend it highly enough,' she says.

Does Dr Martin believe that doctors from the UK have a responsibility to help in global health crises like the Ebola outbreak?

'Holding a baby dying of Ebola, watching her slip away, you think: how could anyone not feel a duty to help?' she says. 'All of us have a duty. Whether you're a medical professional or not, we all have a duty to help each other. There's an "it's their problem, not ours" attitude, but this is a global issue.'

The WHO finally announced a 'turning point' in the outbreak several days after Dr Martin's return to the UK, with numbers of new cases per week dropping dramatically.

'During our training, a counsellor told us to be careful of our expectations - don't go expecting to make any huge changes. So I went out with the mindset that I'm not going to dramatically change anything in Sierra Leone - I'm just a small cog in a huge wheel. But I'm immensely proud of myself and my colleagues, and the UK response,' she says.

Asked whether going back to general practice will be a relief, Dr Martin laughs. Phrasing her words carefully, the part-time salaried GP says: 'The workload as a GP is relentless. The amount of patients we're seeing day in, day out, and the other work around it, such as the calls, the letters, the blood tests - it's a tough job.'

'The work is extremely intense. My experience in Sierra Leone was also intense, but in a very different way. And at least the working conditions will be cooler here.'

Dr Martin thanks the partners at her practice for their 'incredible support', which she may need more of in the coming months as she applies to study for a diploma in tropical medicine. She sees more international deployments on the horizon, but wants to stay in general practice.

'That is the beauty of general practice,' she says. 'It's hard work, but no other specialty offers this kind of flexibility or variety.'

Many GPs could struggle to plan for retirement after Primary Care Support England...

Patients who refuse to wear a face covering when attending a GP practice could be...

No plans for most GPs to open over August bank holiday, NHS England confirms

GP practices will not be asked to work over the August bank holiday unless they are...

More than one in five GPs have had COVID-19, poll suggests

More than one in five GPs may have had COVID-19, according to a BMA survey that shows...

Over half of GP partners believe primary care networks (PCNs) will have a positive...

Primary care networks (PCNs) must not be forced to wait until 2021 to recruit mental...