0.25 CPD Credits
Reflect on this article and add it to your CPD organiser on MIMS Learning

ENT surgeons use keyhole surgery to gain access to the various parts of the upper airway. Here, a patient with a history of severe chronic nasal polyposis is having the polyps removed. This condition is normally managed medically and relatively few cases require surgery, but this patient had severe recurrent disease, even after treatment with long-term nasal and oral steroids. 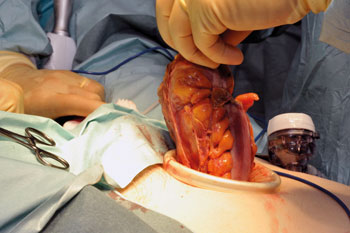 Many traditional surgical procedures have been transformed by the new techniques of minimally invasive surgery. The first operations that were introduced widely were abdominal and orthopaedic. They have become more technically challenging, but the advantage of improved postoperative care and complication rate have pushed the surgeons to improve. Here, a rectal carcinoma is being removed as part of a laparoscopic anterior resection. 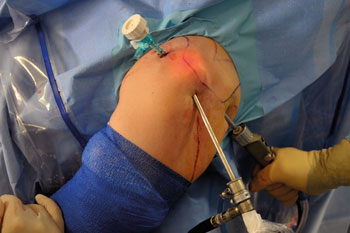 Orthopaedic surgeons were quick to explore the possibilities of easy access to a number of joints. This patient had a supraspinatus tear and is undergoing arthroscopic subacromial decompression and rotator cuff repair. Although the procedure was initially painful postoperatively, the patient made a very good recovery. 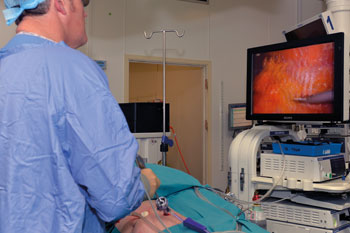 There are a number of laparoscopic techniques. Here, a special 3D camera is in use. This was developed to try to give the surgeon a better sense of depth when operating, compared to the traditional view in 2D on a flat monitor. The surgeon can be seen wearing goggles, not dissimilar from those used in cinemas or homes. The screen image cannot be viewed properly without wearing the goggles. 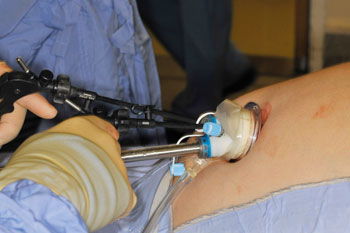 A variation on the traditional abdominal technique is the single port system. The idea is to reduce the surgical intervention by reducing the number of ports to access the internal organs. The difficulty of this technique is fairly obvious. Access through one port means that the surgeon has a much narrower range of movement for the instruments. Not all operations can be carried out this way, but here, a cholecystectomy was undertaken. 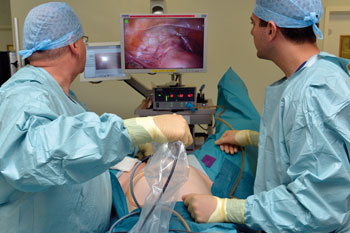 Another group of surgeons to embrace laparoscopic surgery are gynaecologists. Here, a 40-year-old woman is undergoing laparoscopic hysterectomy for adenomyosis.

Total abdominal hysterectomy may still be required, for example, where there is significant enlargement of the uterus, but in a relatively simple case, recovery time is dramatically better than the traditional method. Pelvic endometriosis is also commonly treated laparoscopically. 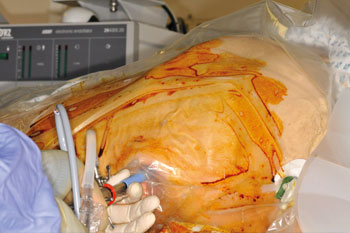 As well as ‘cold’ surgery, the laparoscope is increasingly used as a diagnostic tool and as the operative solution in emergency surgery. Operations such as laparoscopic appendicectomy are now widely carried out. This case was different, with an emergency admission in a 50-year-old patient who had a history of alcohol abuse, who had been found collapsed at home. He was severely ill and was rushed to theatre, where a laparoscope was inserted. This revealed a lot of dead tissue, owing to necrotising pancreatitis. Despite aggressive treatment to try to remove the necrotic tissue, the patient died a few days later. 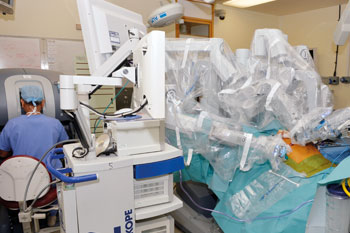 Perhaps the ultimate option, certainly as far as patients are concerned, is the robotic technique. Here, the surgeon is sitting in a booth away from the patient. The instruments are inserted and assistants help with this, while the surgeon operates by using a 3D screen and a combination of hand and foot controls. It takes a long time to learn these techniques, and the operations may take longer than traditional methods. There are also substantial costs associated with these machines. Some surgeons feel this is not as significant an improvement as it might appear. Here, a 65-year-old man is having a robotic prostatectomy.