UK GP Dr Gerard Bulger is the only qualified medic on the island of Tristan Da Cunha, in the south Atlantic. Here he explains the challenges of the world's most extreme single-handed practice.

Location
37 degrees, 5.3 minutes south: 12 degrees, 20.0 minutes west: that’s the middle of the south Atlantic. Cape Town, South Africa, is 1,500 miles to the east and is where patients go to and supplies come from. St Helena is 1,300 miles to the north, Montevideo, Uruguay, is over 2,100 miles to the west, and the Falkland Islands are the same distance south west. There is no airfield.

Tristan Da Cunha is one of the last bits of pink on the map. Those of a certain age will remember when the entire population was evacuated, 50 years ago to the UK for a few years when the volcano erupted. The islanders voted to come back. The population is 270.

I never knew that 270 people were so many. It’s a busy place. What’s more it is solvent. They pay their way in the world by selling fishing rights, selling stamps and limited tourism. They grow much of their own food with vegetable patches, cows, sheep, chickens and ducks, as well as catching fish. They have a little shop, engineering works and a crayfish processing factory. Everything that is needed is here, but on a very small scale. Income is low, very low, but the islanders all have a detached house, gas, electricity, TV (two British Forces Channels), and even a car that never gets out of second gear. 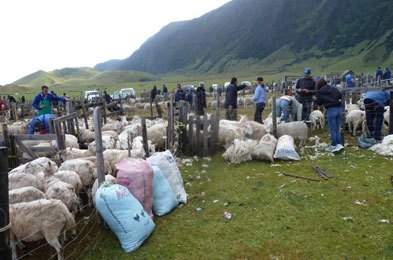 Sheep shearing on the island 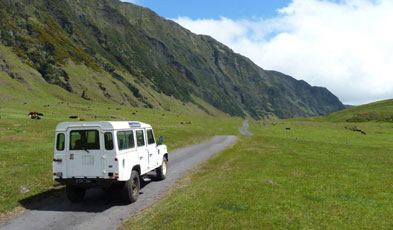 Only the smaller more adventurous cruise ships call in here as there is no harbour to speak of.  Passengers have to land by tender which can be exciting, if not impossible, on some days. These ships add to the population for a few days a year, and cause a lot of excitement and work while the tourists are here.

To get to Tristan the islanders use MV Baltic Trader, which they call the slow boat to China, because she can take 10 days to get here from Cape Town, or the MV Edinburgh, a fishing vessel which can do the trip in six days. There is a boat coming and going every six to eight weeks. 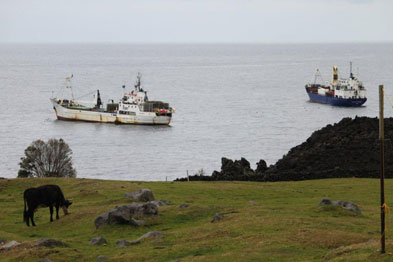 Transport: Fishing and transport vessel on left and MV Baltic Trader, main transporter on the right

Life as a GP in Tristan Da Cunha
I used to be irritated when my old practice in Bovingdon, Hertfordshire, was called single-handed. I said there was no such thing; for the smallest practice had a practice nurse, an assistant and worked in a team, which included the out of hours co-op. But Tristan is single-handed practice in the extreme, perhaps the last one in the world. Not only am I the only doctor here, I am the only medically qualified person. There are no nurses, only care assistants. One task is to create a team on Tristan that’s not so dependent on any one doctor.

So you’d be expected to do anything and everything. A caesarean section was performed in November. I’m managing a femoral fracture now, and I sent a patient with a tumour to Cape Town on a passing research vessel. The hospital is equipped, but it has been a bit chaotic, as each doctor has come along and purchased according to his whims. There is even a gastroscope here, but no sigmoidoscope. But there is useful and obvious stuff here such as ultrasound and X-ray. I spent the first few weeks finding and fixing stuff; some of it had never been used. 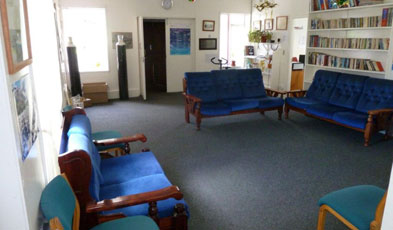 Hospital on the island

Calling home can be tricky
It seems that I am the first GP here, or certainly the first UK GP here for a long while. The surgical and anaesthetic sides have taken precedence in the job description. Now that the internet is getting a little better here, and Skype works, doctors could now be supported by specialists back in Cape Town or in the UK when an emergency arises. The single-handed and isolated status will change. Currently the internet here is worse than N3 ever could be: here it’s 512kbs for the whole island. So if I had a crisis everyone else would have to shut down their computers.

I have fired up an NHS clinical system, which might seem a little over the top for such a small population, but looking after 270 people requires all the processes needed to look after a population of 2,700 (the list size of my previous practice). Keeping the pharmacy and consumables in stock is a nightmare, and too much goes out-of-date.

The doctor dispenses: this is single-handed practice. We are using Microtest’s hosted server in the UK, as the prospect of running a server here was too much. It has an extremely narrow bandwidth requirement and we need its full dispensing practice module, stock-keeping and document management, that all come in the one login.  A second internet connection is to be set up and give the hospital priority.

Primary care
I can tell that primary care was not a priority. BP management was not exactly according to NICE guidelines.  I have ordered a 24-hour BP monitor.  The peak flow meters were out of date, and there was no spirometer, until I found one unused in its original box in the garage.  Asthma is common here - at 42% - due to genes coming in from St Helena at the start of the settlement.  Diabetes is very common, as is obesity and high alcohol intake.  I am currently following up likely haemochromatosis, which may be a cause of their arthritis and diabetes.

Despite all this the community is fit. Everyone goes out to their veggie patches. A person’s day can start there, then go on to the fish factory, then back. There is true community care here. There are three bed-bound patients being cared for at home. No ripple mattresses and no bed sores. The ducks and chickens need to be fed, the cows and sheep moved pastures. There is full employment.  Most have more than one job or task.

Issues on the island
The questions I have to ask myself will help populate my appraisal folder. For example: the one incubator died, it was a 1980s model. I was not thinking of getting a new one (cross infection is not an issue) but that policy made the population uneasy, as if equipment is a totem of good care. We have one pregnant woman at the moment. Fertility is low. The school has 32 children.  Since only 1% of pregnancies deliver before 32 weeks it is unlikely we would ever need an incubator. If we had a very premature baby we would have problems with or without an incubator. It’s not easy to keep equipment like that in good order, the care assistants trained to use it and keeping the filters in date: all when it may never be used. Kangaroo care would seem the safer option. To my delight consultants in the UK are very willing to advise me further by email and reassure me. We may get a second-hand incubator: medicine cannot always be seen to follow Spock, be rational without heart.

Then you have to relearn stuff from medical school. When was the last time you looked at a blood film and counted it? Tried to grow stuff on a Petri dish? One of the doctor’s duties here is to check the water supply, partly because the fish factory is seeking EU certification.

My favourite questions to ask consultants are medical Desert Island Discs. What eight bits of equipment or drugs would you choose, and what would be your luxury item of medical kit to have?

The island hopes to have a rota of doctors coming out here to form more of a team.  A recent advert has now closed, but you could drop NICO a line. You would need at least advanced life support training and have gained experience of procedural anaesthesia.