Section 1 Aetiology and epidemiology
Irritable bowel syndrome (IBS) is a functional gastroenterological disorder of the colon in which abdominal pain or discomfort is associated with change in bowel habit and bloating or distension.

IBS is the most common GI disorder seen in primary care.

Despite this, only about 25 per cent of patients with IBS seek medical attention.

The British Society of Gastroenterology has acknowledged the significance of the problem by the publication of comprehensive guidelines for its diagnosis and management.1

Also relevant to GPs are the Primary Care Society for Gastroenterology (PCSG) guidelines for the primary care management of IBS.2 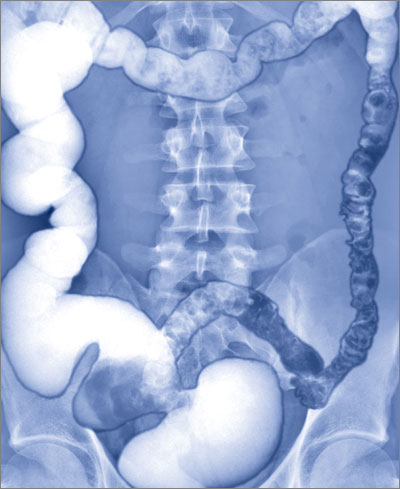 The size of the problem
About 12 per cent of the UK population experiences IBS symptoms in any 12-month period. The precise incidence of the condition is not accurately known, but has been estimated at almost 1 per cent per year.

In general, women are twice as likely to have IBS as men, although men are more likely to present with certain specific symptoms, notably frequent and loose stools.

It has been calculated that each consulting IBS patient costs the NHS £90 per year. In the UK, given the incidence of new cases, the overall number of consultations probably reaches 240,000 per year. This translates into an annual cost to the NHS of about £22 million.

Section 2 Contributory factors
Most IBS patients managed in primary care do not have serious psychological morbidity. However, referred patients display a higher than normal incidence of psychological symptoms and psychiatric disease.

The role of stress
Studies have shown that, in more than 50 per cent of referred patients, the onset of symptoms is associated with a stressful life event, such as work-related problems, bereavement, a surgical operation or relationship difficulties.3

The pain of IBS appears to be due to visceral hypersensitivity. IBS patients exhibit decreased pain thresholds in response to balloon distension of the gut.

It is probable that the central processing of visceral afferent stimuli is involved.

Significance of infection
Persistent bowel dysfunction is seen in 25 per cent of patients following campylobacter, shigella and salmonella gastro-enteritis.4

In one study, which looked at 584,000 patients, the occurrence of bacterial gastroenteritis was the strongest predictor of new-onset IBS in the 12 months after enteric infection, with a relative risk of 11.9.5

Diet
Although many patients believe that some types of food exacerbate their IBS symptoms, evidence that the gut is sensitive to certain food types is limited.

However, studies that have incorporated dietary restrictions followed by sequential introduction of single foods have reported food intolerance in between one and two thirds of IBS patients.

The most common food intolerances in the UK involve wheat, dairy products and coffee.

A lactose-free diet may improve IBS symptoms in some patients, although even lactose malabsorbers do not experience symptoms if their intake is less than 0.25 litres of milk per day.

Section 3 Diagnosis
A careful and detailed history is important, and is often developed over several consultations. This history should identify any relevant psychological factors, family history and personal circumstances.

A dietary history is also useful as this will help identify any unusual dietary habits or triggering medications. For example, both excess and lack of dietary fibre may provoke symptoms in susceptible individuals.

The same is true of excesses of poorly absorbed sugars such as fructose.

In contrast, constipation-predominant effects have been seen with opiate analgesics, calcium-channel blockers and tricyclic antidepressants.

Further assessment
Most IBS patients are diagnosed in primary care, based on the identification of symptoms consistent with the syndrome and the exclusion of organic diseases that have similar clinical presentations.

Criteria for diagnosis
NICE have recently made recommendations on the diagnosis and management of IBS.6 They advise that IBS should be considered if the patient reports at least six months of abdominal pain or discomfort, bloating or a change in bowel habit.

A positive diagnosis can be made if abdominal pain or discomfort is relieved by defecation or associated with altered bowel frequency or form. The pain should be accompanied by at least two of the following:

The presence of other symptoms, such as low back pain, fatigue and bladder symptoms, supports the diagnosis of IBS. Patients suspected of having IBS should have an FBC, ESR, CRP and tests for coeliac disease to exclude other diagnoses.

Sigmoidoscopy is not routinely required.

Patients with alarm symptoms such as rectal bleeding, anaemia and weight loss should be referred for specialist assessment (see box).

Patients aged over 60 years presenting for the first time and those with atypical symptoms also warrant hospital referral.

Similarly, patients who have been diagnosed in primary care with a functional GI disorder but whose symptoms have worsened should be considered for referral to exclude an alternative diagnosis.

Section 4 Management
Treatment includes a thorough explanation of IBS and its symptoms. Being positive about the diagnosis reassures the patient that their symptoms are explainable and potentially treatable.

Drug treatments
The evidence for efficacy of drug therapies for IBS is weak.

Although there is evidence of benefit with antispasmodic drugs for abdominal pain and global assessment of symptoms, it is unclear whether antispasmodic subgroups are individually effective.

There is some evidence of benefit with antidepressants or bulking agents.

Global assessment of symptoms is a construct containing various dimensions.

For each patient, these will have a different weighting and treatment should be aimed at the most debilitating symptom. Stool problems are by definition part of the IBS symptom complex.

Bulking agents may improve constipation and can be used empirically, but should be evaluated at an early stage for individual benefit.

Antispasmodics are often used to treat abdominal pain. These drugs relax smooth muscle but vary in their specificity.

5HT-active drugs
Two newer classes of compound that have shown promise in the treatment of IBS act on 5HT receptors. Early reports indicate that 5HT4-agonists improve constipation while 5HT3-antagonists reduce symptoms of diarrhoea.

However, their precise role in the primary care management of patients has yet to be established.

Diarrhoea and constipation
For patients with symptoms of diarrhoea, loperamide is effective. It slows large and small intestinal transit, and reduces stool frequency and urgency. Loperamide can also be taken prophylactically to avoid embarrassing incidents during work or leisure pursuits.

For patients with constipation, increased intake of dietary fibre, including those derived from cereals, fruits and vegetables has been shown to increase stool weight and accelerate gut motility.

Other treatments
Hypnosis, biofeedback and psychotherapy all have evidence of benefit in referred patients. A recent trial of CBT demonstrated its effectiveness in a general practice population.7

2. Guidelines for the management of IBS in general practice. Primary Care Society for Gastroenterology. www.pcsg.org.uk