Reported prevalence in the UK ranges from 2.5% to 10.5%. This may not represent the true prevalence because not all patients seek medical attention and the absence of a diagnostic test may result in underor over-diagnosis.

IBS can affect any age group and a female preponderance is reported in most studies. An understanding of the pathogenesis is important.1

Rather than focusing on one bacterial species, differences in the gut microbial population are likely to be the key triggers. This is supported by therapeutic and molecular studies. A therapeutic benefit with probiotics has been reported in several studies. Sophisticated molecular techniques are now unravelling differences in bacterial populations between IBS patients and healthy controls.

The mechanisms by which gut microbiota cause IBS are uncertain, particularly in post-infectious IBS, where the risk of IBS is related to the severity and duration of the acute gastroenteritis episode. The pathophysiological processes postulated to contribute to IBS symptoms are conceptualised in figure 1.

IBS can be classified according to predominant symptom type and severity, both of which guide therapy. Stool form classifies patients in subgroups: IBS with diarrhoea (IBS-D) or constipation (IBS-C), mixed IBS (IBS-M), or unsubtyped IBS (IBS-U).2

Severity is best judged on the extent to which symptoms interfere with daily life or affect quality of life. For audit and research, the IBS severity scoring system gives a measure by which to judge entry criteria and response to therapy. It measures severity of abdominal pain and assesses pain frequency, bloating, dissatisfaction with bowel habit and interference with life, on a visual analogue scale.

The cardinal symptom of IBS is abdominal pain or discomfort, typically relieved by defecation and precipitated by physiological events such as eating. Pain is accompanied by a change in frequency and/or consistency of stools.

IBS coexists with other functional disorders, in particular gastro-oesophageal disease, non-ulcer dyspepsia, chronic fatigue and fibromyalgia, and each supports a diagnosis of IBS. IBS symptom subtypes are defined from the history.

A practical approach is to elicit symptoms of ABC – abdominal pain, bloating and change in bowel habit. Then, in the absence of alarm symptoms, investigations depend on symptom duration, severity and subtype, age, sex, family history and psychological comorbidity.3

The threshold for colonoscopy should be lowered for IBS-D with a family history of inflammatory bowel disease (IBD). Early ovarian cancer has similar symptoms to IBS and should be excluded in women >50 years.

In patients with IBS-D, other causes of diarrhoea are considered (see case study, section 4). 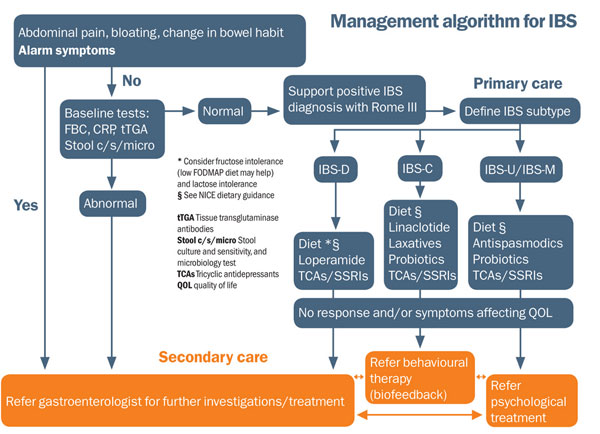 An evidence-based approach to management is summarised in the algorithm. An important aspect is linking each reported symptom to IBS diagnostic criteria to educate patients on how a positive diagnosis is reached.

A gluten-free diet may help patients with IBS-D, particularly those who are HLA-DQ2/8-positive.5 The evidence for a FODMAP diet is not compelling.

A recent meta-analysis indicated that antispasmodics are more effective than placebo. When the analysis included only high-quality studies, benefit was lost.6 Antispasmodics are still worth considering, particularly where pain is mild and episodic, as side-effects are minimal.

Loperamide reduces gut transit and may suffice to control diarrhoeal symptoms in IBS-D. There are no RCTs of laxatives in IBS, but they are commonly prescribed for IBS-C.

Most osmotic laxatives are well tolerated except for lactulose, which aggravates flatulence. Stimulant laxatives should be avoided due to risk of dependency.

Antidepressants relieve pain and other symptoms. One meta-analysis showed significant benefit with tricyclics and SSRIs, with NNTs of 4 and 3.5 respectively.7 These agents are reserved for patients with chronic or frequent symptoms. Improvement is expected in two to six weeks.

The diverse design and outcomes of trials of probiotics makes it difficult to translate their results into clinical practice, but probiotics have shown beneficial effects on pain, flatulence and bloating in most studies.

Linaclotide is showing robust efficacy for symptom improvement and resolution in IBS-C and is the only drug licensed for it.

CBT or gut-focused hypnotherapy is reserved for patients with moderate or severe symptoms associated with psychological distress and impaired quality of life.8

Psychodynamic or interpersonal psychotherapy is an option where traumatic life events or coping difficulties prevail.

The natural history of IBS is variable. A recent systematic review reported outcomes after a two-year median follow-up, where 30-50% of patients had stable symptoms, 2-18% had worsening symptoms and the rest reported either symptom improvement or resolution.9

Follow-up aims to offer support, review response to therapy and investigate new symptoms. There is no recommended period for follow-up.

A 23-year-old woman presented with abdominal pain, diarrhoea and mucus per rectum. The pain was relieved with defecation, triggered by eating and associated with bloating. The symptoms were restricting her lifestyle.

A previous colonoscopy showed non-specific patchy colonic inflammation. There was no response to mesalazine. Clinical examination was unremarkable. Her blood tests were normal, including CRP and a coeliac screen. Stool testing was negative. A repeat colonoscopy to terminal ileum was normal.

A positive diagnosis of IBS-D was made, supported by normal repeat investigations.

The patient was reluctant to use long-term drugs. Loperamide was effective for the diarrhoea, but not the pain. She was referred for gut-focused hypnotherapy. She completed 10 sessions and her symptoms completely resolved.

She presented again one year later. Her symptoms had recurred, but on this occasion there was associated rectal bleeding. Her CRP was raised (15mg/L). A repeat colonoscopy showed distal continuous proctitis.

The initial presenting symptoms of abdominal pain, bloating and diarrhoea fulfilled the criteria for a diagnosis of IBS.

Her predominant stool pattern defined her as IBS-D. An IBS-D subtype presentation has a wider spectrum and different conditions within the differential diagnosis than other subtypes.

The main conditions that merit exclusion within this age group are IBD, coeliac disease and giardiasis. These conditions were excluded and hypnotherapy was effective.

When this patient presented again with rectal bleeding (an alarm symptom), further investigation with colonoscopy was mandatory. On this occasion, there were changes consistent with IBD.

This case highlights the overlap in the clinical manifestation of IBS and IBD, making diagnosis difficult.

Even with a positive diagnosis of IBS, clinicians should always consider alternative diagnoses, particularly when symptoms change.

It is also noteworthy that some conditions can coexist; for example, up to 30% of patients who have IBD also have IBS.

The Coronavirus Crisis: Our 'Thank You' to all healthcare teams

The medical staff at Haymarket know how hard you are working from our daily contact...

GPs barred from speaking out about PPE shortages

GPs in parts of the UK have been banned from speaking out publicly over concerns...

Practices to work through Easter bank holidays in coronavirus outbreak

GP practices will be expected to remain open during the Easter bank holidays in response...

Locums will be guaranteed full death-in-service rights during the coronavirus outbreak...

GPs have demanded clear government advice on how doctors should approach high-risk...