Current prenatal tests for Down's syndrome, such as amniocentesis or chorionic villus sampling, require insertion of a needle into the uterus to acquire a sample for genetic testing.

This procedure is associated with a risk of miscarriage of about 0.5 per cent, forcing parents to either accept this risk or miss out on knowing whether or not their child has Down's syndrome.

A new test has been developed which carries no increased risk of miscarriage because it uses samples of the mother's blood, rather than samples of amniotic fluid, to detect whether the extra chromosome which causes Down's syndrome is present. 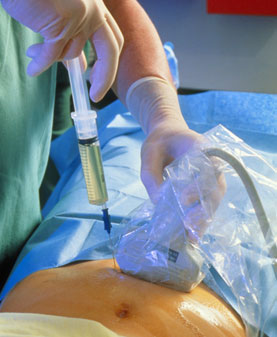 The researchers were able to count the number of copies of each chromosome by examining how frequently DNA sequences from each occurred.

Since they were trying to spot extra chromosomes, whether the DNA scanned came from the mother or fetus did not matter as the mother's genetic status could be established.

In particular, the researchers looked at the occurrence of sequences on chromosomes 21, 18 and 13, extra copies of which lead to Down's, Edward's and Patau's syndromes, respectively.

They were then able to identify cases of these syndromes by identifying blood samples containing higher levels of DNA from these chromosomes as early as week 14 of pregnancy.

What do the researchers say?
Senior author of the research Dr Stephen Quake believes this test will be safer.

'We believe this is the first demonstration of a universal, non-invasive test for Down's, Edward's and Patau's syndromes. Non-invasive testing will be much safer than current approaches.

'We need a larger study to understand a bit more about the best way to implement it, but I am highly optimistic it will be used as a diagnostic test in short order,' he said.

If a larger trial is successful, the new test could be available in two or three years, he added. The test currently costs around £400, but the cost of sequencing should continue to drop dramatically in the near future.

What do other researchers say?
There is 'no question' that the non-invasive test would be introduced in the next few years, according to Carol Boys, chief executive of the Down's Syndrome Association.

'It's incredibly important that potential parents are given accurate information on Down's syndrome before they make a choice about whether to terminate or not,' she said.

'We don't consider Down's syndrome a reason for termination, but we recognise that bringing up a child with Down's syndrome isn't right for everyone. The more informed parents are, the better the position they are in to make the choice that is right for them.'