This elderly man with a history of cigarette smoking presented with a chest infection. Unlike most patients with these symptoms, he had signs clinically and radiologically in the right lung. He was treated with amoxicillin and made a full recovery. A repeat X-ray taken one month later confirmed resolution of the infection, and no sign of an underlying malignancy as a cause for the whole process. 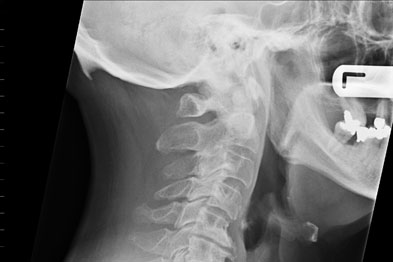 This common condition is seen here in the neck, with features including reduced disc space and marked osteophytosis. As is often the case in osteoarthritis, the clinical severity does not necessarily correlate with the radiological appearance. An explanation with reassurance about the waxing and waning nature of the problem, along with advice about exercise and the use of simple analgesia, may be very effective. 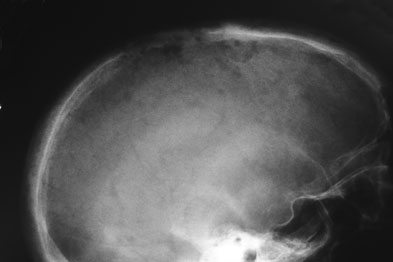 This patient had multiple bony metastases both in the skull and elsewhere, in the late stages of his disease. These were lytic lesions. The five most common malignant tumours causing this type of metastatic deposit are breast, lung, prostate, thyroid and kidney. However, the primary tumour was never identified in this case as the patient only presented at a very late stage in the disease. 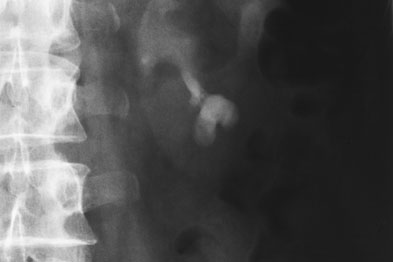 This patient passed a small renal calculus. Subsequent investigation revealed the source of the original problem. He was initially horrified as the tiny calculus he passed caused considerable pain and the prospect of further problems was very alarming. No further pieces have broken off the main calculus so far, and the patient's renal function is normal. He is awaiting lithotripsy, and will hopefully not require open surgery. 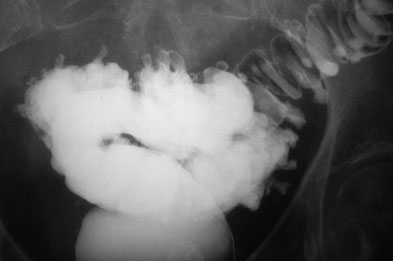 This is another common problem in elderly patients. This disease is more often diagnosed by colonoscopy, but is illustrated nicely on this X-ray. The numerous 'pouches' are clearly seen in the descending and sigmoid colon. It is important that these patients are advised about their diet to reduce the chances of one of these diverticulae becoming infected. 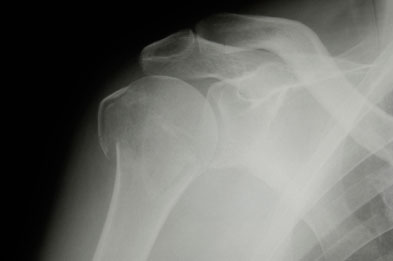 This 60-year-old man fell onto his outstretched arm and sustained this fracture to the top of the humerus. This is a commonly seen fracture, representing as many as 3-4 per cent of all fractures. This injury is normally managed conservatively with a collar and cuff along with physiotherapy to maintain range of movement and muscle strength. Approximately 10 per cent of cases may require surgery, usually because of displacement. 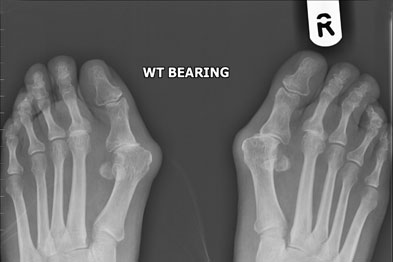 This woman has bunions on both feet. She has a family history, which is often the case, and she has considerable pain in her feet. She is also unhappy about their appearance and struggles to find 'satisfactory' shoes, though this would not be an indication for surgery on its own. Surgery is only undertaken for gross deformity, especially if the rest of the toes are significantly deformed. Pain is also an appropriate indication for surgery. 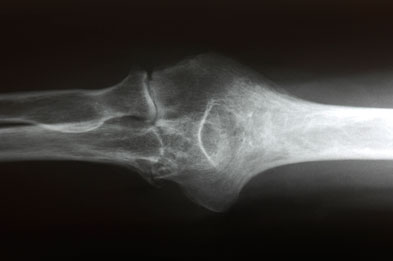 This 40-year-old woman has quite severe rheumatoid disease. This X-ray shows the destruction of the joint, which causes her considerable problems. She had a great deal of pain and stiffness and underwent joint replacement surgery. This surgery is relatively new and is associated with a high rate of long-term complications, with up to 30 per cent of patients requiring further surgery within five years. This patient, however, did achieve reasonable movement and significant pain relief after surgery.