Vertical integration of the NHS could leave some GP practices facing competition from their local hospitals. Neil Roberts reports.

Integration has been the buzzword of the NHS in England for several years, but 2014 is the year when many experts predict that it will begin to happen.

As with many strategic policy ideas, integration means very different things to different people. For some, the term remains an empty vessel into which ideologues and businesses can pour their own particular policies.

Both Conservative and Labour health teams say they want an integrated health service, but their visions are very different.

One aspect of integration that has triggered promises of salvation and fears of doom is the move by some foundation hospital trusts (FTs) into primary care and general practice.

In January, GP reported a legal row over a tender process for out-of-hours contracts in the north-east of England. Among the bidders understood to have won contracts from GP-led Northern Doctors are two FTs - a hospital trust and an ambulance trust.

Newcastle and North Tyneside LMC chief executive and GPC member Dr George Rae told GP at the time that he feared 'vertical integration' and 'empire building' by FTs could mean primary care services being taken out of the control of GPs.

While primary and secondary sectors needed to integrate, Dr Rae said, GPs must be able to shape primary care.

Chief executive of Northern Doctors John Harrison had previously warned that GP out-of-hours providers could be 'squeezed out' by expanding FTs and the integration of urgent and emergency care.

What is now emerging, and being fought over, are two broad visions of integration between primary and FT-led secondary care: vertical integration by an acute FT through competition, or various models of collaboration where general practice can maintain a greater degree of independence and leadership.

Newcastle-upon-Tyne Hospitals FT has blazed a trail in vertical integration, launching Freeman Clinics in 2008, a joint venture company owned 80:20 with local GPs to run primary care services in the city.

The trust set out its vision of full integration of primary and secondary care within a single organisation in its 2010 policy document, Better Together. 'We seek to once and for all bring about a cohesive pathway of care for patients from home to hospital and home again,' it promised.

In two of its three Freeman Clinics, GPs are salaried, which has raised fears that GPs could lose their independent contractor status by stealth from above, as practices are swallowed up by FTs.

Nuffield Trust senior fellow and south London GP Dr Rebecca Rosen warns that the entrepreneurialism and innovation of general practice could be lost if practices were just taken over by FTs.

All integration is good, says NHS Alliance chairman Dr Michael Dixon. But ideally, it should happen around primary care, with specialists joining in the community.

However, 'where there isn't the will or wherewithal for integration that starts with primary care, an alternative where the foundation trust itself begins the process of integration is desirable', he adds.

But he warns against FTs using primary care as a 'shop window', to fuel demand for secondary care, or to catch patients for a particular trust, which would not be in the interests of patients or commissioners.

'I think it needs to be watched carefully as to what the motives of the FTs are,' he says.

Local LMC chairwoman and GP clinical director at the trust Dr Jane Lothian says she is employed 'to make sure (the trust's) activities are GP friendly and linked into what's happening in primary care'.

Northumbria, says Dr Lothian, takes a collaborative approach to integration with primary care. The trust has members on boards of local GP federations and representatives at LMC meetings.

While the fear of expansionism by secondary care exists, says Dr Lothian, many local, financially battered practices recognise they have to integrate to survive.

GP fears are legitimate, she says, where trusts will not listen to primary care. 'But where trusts are willing to listen to our side of the story, GPs shouldn't be afraid of exploring the possibilities.'

Evidence from the US suggests hospitals may have cultural difficulties running primary care, according to King's Fund senior fellow and KPMG director of global healthcare Nigel Edwards.

Faced with the choice of collaboration or competition, trusts could be better off working with general practice, getting their medical specialists into primary care, adding value to practices.

'They can say to practices, if you can get standard operating procedures on how we approach COPD, or diabetes or whatever, we can give you sessions of a respiratory physician, we can work with you to change the model of care. They are more likely to get a better result than if they say, "We are going to man the barricades and go into competition.".'

There are whole sets of skills required in primary care that GPs bring, says Mr Edwards, so trusts have to develop proposals to get innovative GPs on board. 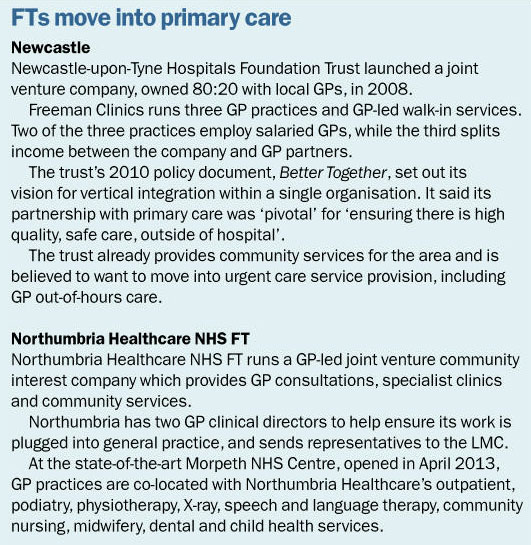 Mr Edwards acknowledges that FTs do not necessarily have all the expertise to run general practice, but, he says, they do not need to in order to move into the sector. 'They can learn,' he says. 'And the way they learn is the classic way you enter a market: you attack the bottom.'

Nobody could argue there is too little work to go around in primary care, and Mr Edwards sees FTs moving into those parts of local health economies where space is opened for them - where there are GPs retiring, where practices are struggling.

Dr Dixon echoes that warning. 'The wolf is at the door,' he says.

Integration will happen because it's better for patients and the NHS, 'and if general practice doesn't step up, then others will', he adds, 'and that will be the death knell for general practice as we know it'.

But what do GPs have to do to grasp the supposed opportunities of integration and avoid the doomsday scenario?

Within the next few months, CCGs could begin the development of co-commissioning of primary care, says Dr Dixon. So GPs need to start grouping with neighbouring practices, developing a vision for the future, getting the management they need to implement that vision, and building relationships with CCGs.

Head of healthcare at premises firm MedicX Group and former GP Dr Mike Shillingford says FTs have a lot to offer general practice and GPs should remember they remain gatekeepers of the NHS.

The GP contract agreement to give up out-of-hours services in 2004 is a lesson, he says; it 'produced a weakness in the system because it allowed others to compete in that space'.

Nathan East, a specialist lawyer at DAC Beachcroft working on an integration pilot in north-west London, says there are many more benefits for practices in integrating with trusts than there are threats.

But practices have to unite locally and get around the table.

Calling NHS staff 'heroes' reflected the personal risk and sacrifices they took on...