The validity of NHS health checks has long been viewed as doubtful, but Public Health England is now determined to revive the scheme. David Millett reports.

In the first 12 months after Public Health England (PHE) took control of NHS health checks - the 'midlife MOT' offered to patients in England aged 40 to 74 years - more patients than ever took part.

But five years have passed since health checks were first introduced in 2009, and if the scheme's early targets had been met, all eligible people would have been offered at least one check by now.

The programme has consistently fallen short of targets - even though 2013/14 marked a new high, take-up fell 1m checks short of the level that the NHS hoped to achieve.Despite being reinvigorated under new leadership, many have expressed worries that the trend is set to continue.

PHE's national lead for the programme, Jamie Waterall, says the organisation's first year in control of health checks was 'a really good one' for the scheme, and seems confident PHE can turn it around in the eyes of patients and professionals alike.

'What I hear from local authority colleagues is they feel there's been a real national focus in supporting the programme in the past year,' he says.

'So I think it's been a really good year, I think we've re-energised NHS health checks with our key partners and it's been a very busy year, where we've been working closely with stakeholders to make rapid improvements around the programme.'

But this optimism has not been shared by all. Liverpool LMC secretary Dr Rob Barnett says there has been 'no change' in his area compared with a year ago and he felt the system was 'exactly the same as before'.

PHE is keen to wipe the slate clean, and has reset the clock on targets for offering health checks to patients and boosting uptake. It has committed to ensuring that everyone in England aged 40 to 74 years - apart from patients already diagnosed with vascular conditions - is offered a check by the end of 2018/19.

Uptake also needs to improve. The 1.3m patients who accepted the offer of a check represent about half of those offered one. Regulations require local government to demonstrate year-on-year improvements in numbers of people accepting health checks until uptake hits 75%.

Uptake has been stuck at about 50% for the past few years, but PHE hopes to achieve a 'step change' to 66% in the current financial year.

It says there are complications in trying to increase this further - namely the likelihood of reaching a ceiling where it becomes more and more difficult to convince those resistant to the check to accept, particularly people in hard-to-reach communities.

The health check has long faced criticism from GPs that it offers limited benefit to those who need it the most. Clinicians fear it is the 'worried well' who tend to accept offers.

Professor Mike Kirby, a GP in Hertfordshire with an interest in cardiovascular disease, says targeting members of the population 'area by area' could be more effective than indiscriminately targeting everyone eligible at once. This would mean extra focus would be put on patients in high-risk populations.

'So many of our population are never checked,' he says. 'I think the strategy at the moment is based on seeing the worried well more than the people who are really sick.' He called for a strategy to identify populations at need, 'which is often the most deprived area of a CCG'.

So what strategies does PHE need to implement to try to engage these communities?

The future success of the health check could rely on local GP-led attempts to engage people in communities who would reap the greatest benefit from the scheme.

What are health checks meant to achieve? 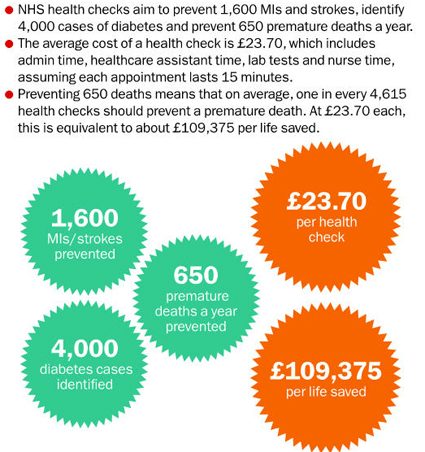 Mr Waterall says: 'This programme will only be successful if we ensure there's high public engagement and particularly engagement with high-risk, vulnerable communities.

This is where we need to see innovation from both the NHS and local governments.'

Local councils, in partnership with GPs, are increasingly running neighbourhood events away from traditional settings to increase uptake in socioeconomically deprived areas.

Possible schemes which have apparently reaped success across the country include health check clinics set up on the dockside to target fishing communities and outside mosques to improve uptake in South Asian communities. Others have taken place in community centres and football clubs.

'Dr Wright developed this programme taking a bus around Manchester, particularly to the most deprived areas, because he was concerned that they hadn't got good accessibility to general practice.

'He was a fantastic GP leader whose visionary thinking about how we mobilise prevention services and take them to where they need to be, was really successful.'

PHE has not set a national tariff for remuneration received from the tests, which will be decided locally. But it said this could allow for some fluidity in the amount paid per check, and could pave the way for models where providers receive greater sums for engaging people in more vulnerable communities.

PHE may face a battle to convince sceptical GPs. Dr Barnett says he personally would 'not touch' the health check and a practice nurse led scheme would be better.

'I think we should stop it completely,' Dr Barnett adds. 'I'm not convinced the uptake from patients and the pickup of illnesses and conditions we were unaware of has been particularly great. Indiscriminately screening in the way this is being done isn't a cost-effective way of managing health, especially when budgets are tight.'

Professor Kirby agrees that spending a lot of time on the health check was 'not a good use of GP time', although he says GPs should have a 'leading' role in getting the programme up and running.

'Even PHE has accepted that the evidence base for the health check is not substantial. So to my mind, a halt should be called on health checks until there is evidence that suggests they're useful.'

PHE does concede there is 'no evidence at the moment' that the system is of benefit to patients, but insists this is mainly because nothing like it has been done before.

Individual components that make up the health check are backed by NICE guidance, it says. NICE, for its part, says that 'successfully implementing NHS health checks may help to reduce chronic illnesses and avoidable premature mortality'.

'The one thing the evidence absolutely does tell us is that we have major threats to our population in terms of people developing obesity, cardiovascular disease and cancers,' says Mr Waterall.

'Our view is, the responsible authorities can't sit back and wait another 10 to 15 years for a randomised controlled study to say whether we should do this.

'The precautionary principle plays out here. We should take the course of action we're taking, but evaluate it as we go along.'