Ahead of an office move for GPonline, a quick trawl through bound copies of our print magazines from as far back as the early 1970s revealed that many of the headlines three or four decades ago were startlingly familiar. 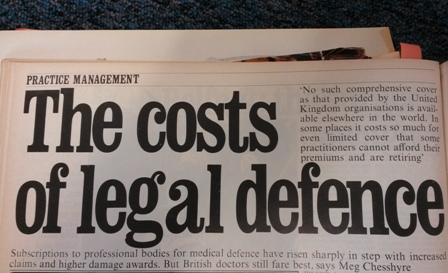 The 12 February, 1971 issue of GP reported that in parts of the UK medical indemnity costs had risen 'so much for even limited cover that some practitioners cannot afford their premiums and are retiring'.

This summer, GPonline reported that one in three GPs said medical indemnity costs had risen 20% in the past five years. The findings came after warnings at this year's LMCs conference that soaring fees were forcing GPs out of the profession. 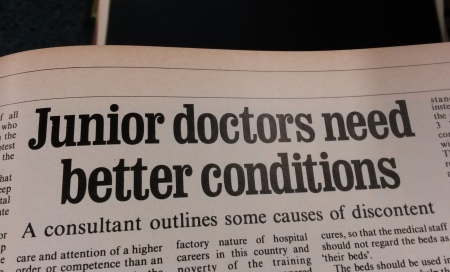 The current generation of junior doctors look set to vote in favour of industrial action as the row with health secretary Jeremy Hunt over changes to their contract intensifies. A 1973 issue of GP shows that their counterparts from 42 years ago were also campaigning for better terms and conditions.

Locum costs, and the relative merits of partnership or employed GP roles are a huge issue for GPs today - last month GPonline reported on an exodus from partnership roles as GPs opt for locum work to escape the relentless pressure that comes with running a practice. 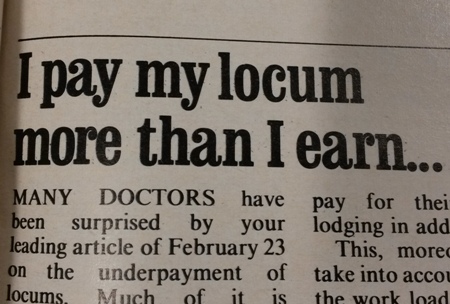 Falling partnership income and rising locum rates have left many GPs questioning whether locum or salaried work could offer better pay than partnerships - a question that the profession was equally struggling to get to grips with in the early 1970s.

General practice in the early 1970s was already aware of the impending rise in pressure that an ageing population would bring to bear, headlines from a 1973 issue suggest. 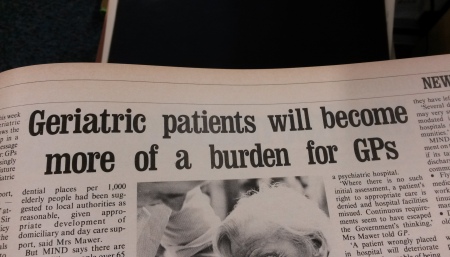 The impact on primary care of a rapidly ageing population is mentioned in almost every major speech or story that touches on the GP crisis and the need to invest a greater proportion of NHS funding in primary care. 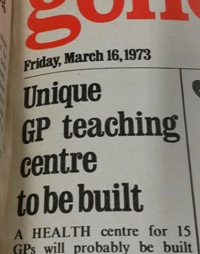 Just weeks after GPonline interviewed one of the GPs behind the creation of a 250,000-patient super-surgery - a model that looks set increasingly to dominate the primary care landscape, it was interesting to see a headline that showed general practice 'at scale' wasn't an entirely alien concept in 1973.

GP's 16 March 1973 issue reported on the creation of a large practice in Sheffield with 15 GPs.

GP workload is possibly the number one issue today for the profession, and GPs in the 1970s faced similar concerns, certainly in some parts of the country.

Variation in the workload GPs face, and in funding across the UK, are also issues GPonline has reported on frequently in recent years and months.

Access to diagnostics in primary care was also a concern for GPs in the 1970s, as the headline from a 1973 edition of GP magazine shows. Perhaps that makes it even more shocking that access to diagnostics - particularly for cancer - remains a huge stumbling block for GPs today. 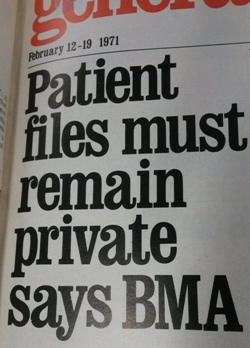 Issues around confidentiality of patient records are regularly in the headlines today, with the care.data programme threatening to scoop up huge swathes of information carefully collected by GP practices on the basis that it was entirely confidential.

Back in the 1970s, BMA leaders faced similar battles to maintain patient privacy, as the 12 February 1971 issue of GP reported.

And no issue of the magazine - almost at any point in its more than 50-year history - would have been complete without something to report on an NHS reorganisation. 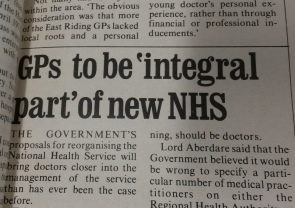 In the early 1970s GP reported on the looming NHS overhaul that took place in 1974. Then, as now, the reforms aimed to put GPs at the heart of the health service.

Some things in the NHS, however, do change. GPs receiving gifts in 2015 are urged to beware falling foul of bribery laws, but a couple of decades ago the atmosphere was possibly slightly more relaxed.

Back in 1991, a young Dr Phil Hammond had just qualified as a GP in Bristol. He penned a tongue-in-cheek article for GP magazine about trying to prove to his trainer that patients liked him. 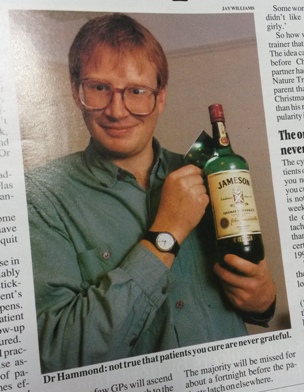 The junior partner at the practice had 'an extra spring in his Nature Treks' in the run-up to Christmas as patients deluged him with cards and gifts. Matching this show of popularity, Dr Hammond felt, was surely the way to prove he too was a top quality doctor.

He wrote: 'I started the week with just one present: a bottle of whisky with a card attached. "Dear Dr Hammond, thank you for signing all my sick certificates. Here's to a restful 1991." I hid it in the cupboard under the sink. By Wednesday it was looking as if that was to be my lot.'

Blast from the past

Many familiar faces were to be found peering out from the pages of 1991 issues of GP magazine. Click through the photo gallery below for a few blasts from the past.