GP prescribing of broad spectrum antibiotics – carbapenems and pipercillintazobactam – has fallen by 8.5% from 2010 levels, PHE statistics show. Over the same time period, prescriptions from NHS trusts have risen by a third (33%).

The figures suggest GPs are making efforts to preserve these ‘last line’ antibiotics, which should generally be used only to treat resistant infections when standard antibiotics are ineffective.

Antibiotic prescribing in general practice has also fallen overall, hitting a five-year low in 2014. But the success comes as research shows GPs may have to expect patient satisfaction scores to drop alongside the number of antibiotics they hand out.

Despite the drop, figures on antibiotic consumption, measured as the defined daily dose (DDD) of antibiotics taken by an individual per 1,000 inhabitants per day, show patients are using 6.5% more antibiotics than they were in 2010, suggesting that longer courses or higher doses are being administered. 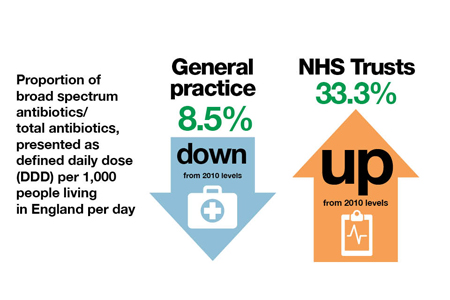 It comes as GPs are braced for an increased wave of patients requesting antibiotics for inappropriate conditions such as colds and flu over the coming winter months. The latest figures suggest one in five patients expect to receive antibiotics when they visit their GP. Three quarters of prescribing takes place in general practice.

GPs should compare antibiotic prescribing practice with peers to help cut down on unnecessary prescriptions and deal with patient demand, PHE said. This follows from controversial NICE proposals earlier in the year, which suggested GPs could face sanctions if their prescribing differed greatly from local or national benchmarks.

Patients should also be encouraged to visit pharmacists as their first port of call for self-limiting illnesses instead of their GP, it said. Pharmacists can often provide patients with effective over-the-counter treatments to help relieve the symptoms of these illnesses, minimising the chance for unnecessary antibiotics to be prescribed.

PHE Chief Executive Duncan Selbie said: ‘Antimicrobial resistance is a growing problem and represents a major threat to public health. We rely heavily on antibiotics and the pressure on healthcare professionals to prescribe is great, even when they are not needed.

‘We need to conserve antibiotics and use them appropriately or we risk losing the power of these medicines.’