Two thirds of GP partners in England say their practice feels less financially secure now than 12 months ago, suggesting most are yet to feel the impact of government pledges to reverse years of underfunding.

A total of 66% of 253 GP partners in England who responded to a GPonline poll said their practice felt less financially secure now than 12 months ago.

An overwhelming 82% said their practice had not felt any positive impact from extra GP contract funding in the past two years or investment promised through the GP Forward View - which pledged to increase overall GP investment by £2.4bn by 2020/21 compared with 2015/16.

GPC chair Dr Richard Vautrey said the results were 'echoed by GPs and practices across the country', and warned that against a backdrop of rising inflation a significant funding increase for general practice in 2018 would be vital to stop rising numbers of practice closures. 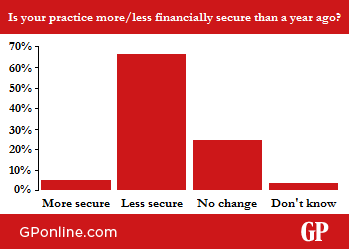 The findings demonstrate that for many GPs, recent overall increases in practice funding at a national level in England have simply failed to make a difference.

Both the BMA and the RCGP have argued that general practice needs an 11% share of the overall NHS budget to become sustainable. In 2016/17, the BMA says general practice was £3.7bn short of this target - and the union estimates that even with projected increases in funding under the GP Forward View, the deficit will only drop to £3.4bn by 2020/21.

Health secretary Jeremy Hunt acknowledged on this website in September the 'formidable pressure' on general practice and said this was why GP funding rose in real terms for the fourth successive year in 2016/17. The health secretary also set out plans for a state-backed indemnity deal, which could yet prove a significant financial benefit to GPs if it helps stop a trend that saw GPs' costs rise 50% between 2010 and 2016.

But this recent and planned investment in GP services has a long way to go to reverse the rapid decline experienced soon after the 2004 GP contract - which itself came after a period of underfunding. Income for partners fell 22% in real terms in just seven years from 2005/6  - when the QOF was introduced - to 2012/13.

GPonline revealed exclusively earlier this year data from a leading medical accountancy firm that showed partners at one in five practices now earn less than the standard rate for salaried doctors. These practices have been labelled 'zombie practices' - a term borrowed from the business world, in which zombie companies is a description given to those able to limp along paying their bills, but struggling to make any significant profit or bring down any debts they may have.

And although GP investment rose in 2016/17, the rise slowed compared with the previous year. In 2016/17 GP funding overall for England rose 3% in real terms, compared with 5% for the previous financial year, according to NHS Digital.

GPC chair Dr Richard Vautrey said of the poll findings: 'These results are echoed by GPs and practices across the country and this is why so many practices are left faced with handing back their contract. It follows a decade of underfunding and even the investment we have secured in the last couple of years is not yet enough to reverse this, as our Saving General Practice report made clear.

'With inflation now over 3% the situation will only get worse if practices don’t receive the necessary funding increase in the coming year to cover rapidly rising expenses.'

What GPs said about practice funding:

GPs responding to the poll warned that any new funding seemed to come with demands for additional work - such as longer opening hours - rather than supporting them to maintain existing services.

Although a handful of partners responding to the poll said that redistribution of funding from PMS contract reviews and the phasing out of minimum practice income guarantee (MPIG) payments had benefited their practice, many more said the changes had had a significant destabilising effect.

Many partners said they had reduced their income to maintain services, or to fund staff salaries and pensions - with several respondents saying they earned less now than they did more than a decade ago.

One respondent said: 'Most practices I suspect haven't benefited much from the GP Forward View funding. The only way we have managed to attract this funding is to take on additional work which is often done by the partners. My feeling is that a lot of the Forward View money should be there to help bolster the services already being provided but that have been inadequately funded, but this has not been the reality.'

Another partner wrote: 'Phasing out of MPIG, seniority payment etc, more and more being based on global sum, only can survive by increasing patient numbers - locally other practices are closing as unable to recruit. Mean patient list size increasing - should fund more manpower but there isn't anyone to recruit. Who would want to work in this miserable stressed environment.'

Partners have been forced to take solace from small victories, such as keeping drops in profits to a minimum. One respondent to the poll said: 'Practice accounts came today - Profits only down £8,000. Practice manager thought this was an achievement given current crisis in GP.'