Intense campaigning and lobbying by GPs and their representatives seemed finally to have provoked a top-level political response at the party conferences last month.

With the NHS likely to be a major issue in the 2015 election campaign, general practice seems to have shot to the top of the political agenda.

Prime minister David Cameron and Labour leader Ed Miliband both promised new investment in general practice, but the policies attached to the cash were received with almost blanket scepticism.

Labour's conference in Manchester saw the party on the offensive over the NHS, a policy area it sees as home turf, on which it can beat the Conservatives.

A week later at the Conservative conference in Birmingham, health secretary Jeremy Hunt (pictured above left) announced 5,000 new GPs. Not enough, said the college. But whether the numbers are enough is not really the point, says City and Hackney LMC chairwoman Dr Fiona Sanders.

'I don't think it's going to happen,' she says. 'People don't want to come into general practice.'

Birmingham LMC executive secretary Dr Robert Morley agrees. 'Where are we going to get them from?' he asks. 'It ain't gonna happen.'

Speaking to GP after giving his conference speech, Mr Burnham said he hoped many of the new GP recruits would work as salaried doctors for the trust-led integrated care organisations (ICOs) a Labour government would create.

The 'new model', he believes, will be more attractive to younger GPs, allowing them to work across the community at the centre of multidisciplinary teams without being tied to a practice.

The mention of ICOs being led by hospitals was enough to spark GP fury. After welcoming the announcement about 8,000 new GPs as 'impressive', and expressing 'delight' at Labour policy, Dr Baker then slammed Mr Burnham's integration proposal.

The plans were a 'top-down reform' that 'could destroy everything that is great about general practice' and bring the 'demise of family doctoring as we know it', she warned.

Labour had been hinting at its policy direction for some time, so perhaps Mr Burnham's plan to ask hospital trusts and other NHS bodies to 'evolve' into ICOs and provide all physical, mental and social health and care should not have come as too much of a surprise.

But Dr Sanders agrees the idea would be an an 'absolute disaster'. Hospital trusts, she says, lack ideas or understanding about general practice, and have enough trouble running themselves, with many in deficit. 'How are they going to organise us as well?'

National Association of Primary Care president Dr James Kingsland says integration should be about getting the right mix of health professionals in a 'primary care home'.

The NHS's efficiency and quality are built on strong primary care, he says, but most of what is being promised by the politicians is not going to strengthen it.

'The biggest issue which has been missed is, while we are talking about investment in the NHS - we all want to do that - the out-of-hospital care agenda can be delivered with a relatively small investment in general practice,' Dr Kingsland says.

'If you get the right skill mix meeting a population's health needs, all the things we are doing as proxies for general practice, wasting money - NHS 111, walk-in centres, even urgent care centres - are all proxies at greater cost than the investment for general practice to step up to the plate.' 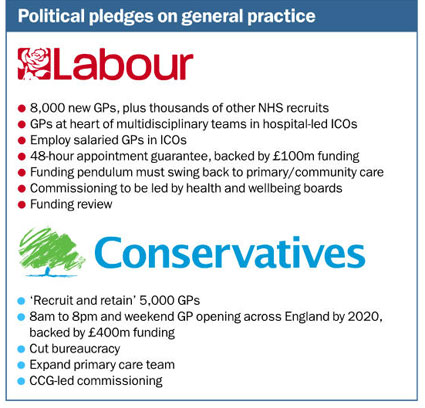 Dr Morley agrees with calls for general practice to change, but warns the process must be GP-led. 'We need to look to ways of better delivering the GP partnership model,' he says.

'Inevitably, it's going to mean changes - we do need to look to larger partnerships, because the current business model is unsustainable - but we mustn't throw the baby out with the bathwater.'

Mr Burnham was keen to reassure GPs that he did not intend to abolish the independent contractor model with his move to ICOs.

Local health and wellbeing boards will decide how to organise their ICOs, which in some cases may swallow up existing practices. But if independent contractors work best in an area, that model can continue, Mr Burnham says.

Tory ministers emphasise that recruitment is not just about GPs, but expanding the primary care team, and developing new roles, such as the physician's assistant.

In Birmingham, the prime minister announced an extension to the Challenge Fund, with new 8am to 8pm and weekend GP access pilots with £100m funding. The programme will then be rolled out to reach every patient in England by 2020, with £400m funding.

Dr Kingsland believes extending the programme could be an inefficient use of precious resources spread too thinly to succeed.

Dr Morley calls the plans 'farcical'. 'They are playing to the gallery and to the wants of the few, rather than the needs of the sickest and most vulnerable,' he says.

General practice, he adds, is 'on its knees and cannot safely deliver five-day care, so seven-day routine access at the convenience of patients is a pipedream'.

'If this is the sort of general practice the government wishes to provide, it has to be prepared to pay for it, and it's going to cost a lot more than the current spend. Even then, the staffing required isn't going to materialise.'

Dr Sanders agrees access must be expanded, but warns these proposals will not work and the costs will be 'phenomenal'. She suggests development of existing out-of-hours, rather than creating a new tier of general practice for evenings and weekends.

While some may be glad top-level politics is finally waking up to the desperate problems faced by general practice, many GPs are sceptical about the solutions on offer. Whichever of the parties is in government after 2015, the NHS faces 'disruption and danger', says Dr Morley.

For Dr Sanders, the plans spell a move closer to the US model of large integrated organisations, whereas what we should be doing is working with what we have.

Dr Morley agrees. 'We must build on what we've got. I'm all in favour of more integrated care, but it has to be professionally led, built on GP registered lists and general practice based, and bring holistic care into that.'

Politicians, he adds, must recognise general practice as the solution and invest appropriately.