More GP data is being extracted from practices than ever. Graham Clews looks at GPs' concerns.

Leaflets began to arrive at every house in the country this month as part of a £2m NHS England campaign to tell people of its plans to extract and share patient data.

The government has set in motion a huge increase in the extraction of data from GP records to develop a 'modern data service' for the NHS.

This data, it believes, can provide 'NHS organisations, citizens and researchers with accurate, timely information which will radically transform the way we care for and treat people and continuously improve the services we offer'.

But the roll-out of the care.data programme, alongside local data collection by CCGs and other organisations, has left GPs concerned.

A recent GP poll of more than 300 GPs found 65% were concerned about the amount of data being extracted from practice computer systems to support commissioning.

The government leaflets inform patients of their right to restrict their data being used as part of care.data. However, GPs will not control how the data is used, or by whom.

Comments from GPs responding to our survey included fears that this was yet another tool to manage performance and concerns that patients were not being told about the use of their information. 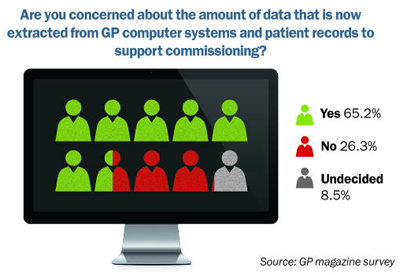 Others felt GPs should be paid for the information, that it could be used for political reasons, or that it was all part of the creeping privatisation of the NHS.

CCGs are using data to performance manage practices' referral and prescribing rates, among other variables.

Doctors told GP that practices whose data patterns mark them as 'outliers' - particularly small practices - can feel under pressure from their CCG. The fact that practices must be members of a CCG to hold a GP contract gives the organisations real leverage.

Even before care.data kicks in later this year, data is being extracted from GP records by CCGs.

Health informatics expert Ewan Davis, past chairman of the British Computer Society Primary Health Care Specialist Group and a former member of the BMA/RCGP joint GP IT committee, says extraction of data currently is largely down to individual negotiation between GPs and CCGs.

He believes the data is likely to be used increasingly for performance management of practices, to feed a greater focus on quality of care in general practice and an increasing desire to explain the considerable variation in primary care costs.

He agrees there are strong indications that CCGs will be handed a stronger role in performance managing GP practices and he says ultimately it will come down to the level of trust between GPs, their CCG and their commissioning support unit. But he questions whether that trust will remain in place a year down the line, when CCGs are likely to be 'completely different bodies'.

'There are concerns from GPs all across London about this, but it's difficult to resist because there are very good reasons to share data,' he says.

Mr Davis says one of the problems with this huge shift in data collection in general practice is that intelligent analysis of data has had a 'difficult history in the NHS'.

Studies have shown that data can vary significantly among practices because of something as simple as different computer systems, and he warned of the dangers of entering a 'vicious data circle', where information is extracted, organisations (practices in this case) are 'crucified' on the back of that data, they game the system as a result, and things become worse, rather than better.

Birmingham LMCs executive secretary Dr Robert Morley says there is concern among GPs on his patch about extracted data being considered out of context.

'Simple data on a website does not tell the whole story,' he says.

He would like to see agreement on all sides for local arrangements to extract data. 'It would be appropriate for all CCGs to consult LMCs to ensure that everyone involved is completely satisfied that these systems are fit for purpose,' he says.

NHS Clinical Commissioners interim president Dr Michael Dixon says the very nature of CCGs requires decisions to be taken locally on what data is extracted and how it is used. What matters, he argues, is transparency. 'It's hugely important that if there is any suspicion or even mistrust of CCGs, that must be looked at,' he says.

'If practices see themselves as being on the receiving end of CCGs' decisions, rather than as a vital part of the decision-making process, that is something that needs to be tackled.'

The Association of Medical Research Charities has launched an advertising campaign hailing the benefits of the care.data programme and urging patients not to opt out of providing their data.

Judging by some of the more pointed comments from doctors in GP's survey, a lot of work will be needed to convince the profession that greater data sharing will work for the benefit of primary care.

GPs complained angrily of being constantly 'policed' in every aspect of their work, with data used 'in evidence against us, particularly by a hostile press'.

Others warned that a 'Sickileaks' culture would emerge when health information was no longer private.

With the majority of GPs expressing doubt over the level of data extraction, the DH will have its work cut out to avoid one GP's comment becoming the prevailing mood in the profession. He said simply: 'I will be opting out and advising my patients to do the same.'