The Treasury accepted DDRB recommendations to increase overall funding for practices by just 0.28%, which it said would give GPs a below inflation pay rise of 1%.

But GP leaders said the funding increase would not deliver the 1% pay rise.

GPC deputy chairman Dr Richard Vautrey said: 'The bottom line is that it is nowhere near enough to deliver the 1% rise in GP income being recommended.

'The result will inevitably be a further pay cut to GPs who will feel their hard work and dedication has been completely undervalued and they will see this award as another kick in the teeth.'

The DDRB based its advice that overall GP funding should rise on three key factors - staff pay costs, the 1% intended rise and inflation. It found that a 0.28% increase in funding should be enough to deliver the 1% rise even in the face of rising inflation because it estimated that staff costs had dropped by 1.4%.

GP leaders have warned that an insufficient funding increase would risk exacerbating the primary care workforce crisis and undermining services.

The GPC had asked for a net rise in line with inflation, currently 1.9%, taking account of expenses.

But NHS England called for pay rises to be capped at 1%, in line with government policy on public sector pay. 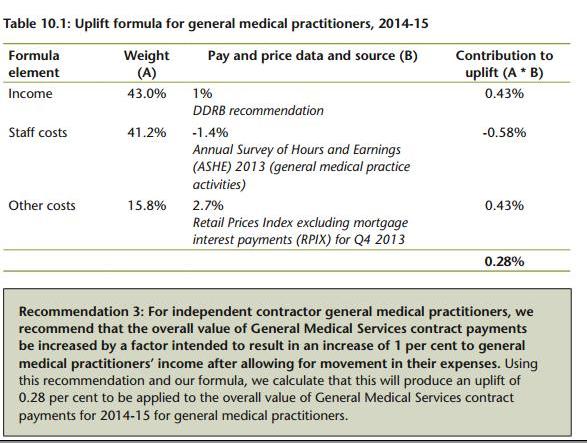 In 2013 the DDRB recommended a 2.29% overall uplift to GMS funding, but health secretary Jeremy Hunt slashed that to 1.32%.

The DDRB recommendation was intended to cover increases in practice expenses and staff pay and deliver a 1% net increase to GP pay in line with other doctors.

Official figures released last year for 2011/12 showed a sixth consecutive year of falling pay for GPs, with an average 1.1% fall before tax after expenses.

Data from the Health and Social Care Information Centre showed practices spent 61.6% of their income on practice expenses, up from 56.5% in 2004/5.

Chief secretary to the Treasury Danny Alexander said: 'Public sector workers make a vital contribution to the effective delivery of public services. We need to continue with public sector pay restraint in order to put the nation’s finances back on a sustainable footing.

'We are delivering on our commitment to a 1% pay rise for all except some of the most senior public sector workers.'

The DDRB also recommended a 1% rise for salaried GPs.

GPonline.com's sister website Medeconomics has teamed up with specialist medical accountants Ramsay Brown & Partners to provide all subscribers with a forecast of their practice's financial performance as the MPIG is phased out over the next seven years.

Retired Derbyshire GP Dr Om Prakash Chawla, who was known for his warmth and kindness,...