GPs can play a crucial part in improving the efficiency of eye health services by using commissioning powers to move care from hospital to the community.

This was the key finding from a round table debate last week involving experts from optometry and general practice, organised by the Local Optical Committee Support Unit (LOCSU) and GP newspaper.

The panel heard that a growing elderly population and increasing workload pressures on hospital ophthal-mology departments meant a new approach was needed to improve patient access to eye care. 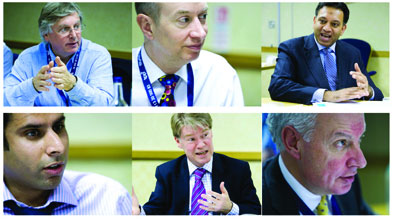 Improve detection
The projected total cost to the healthcare system due to partial sight and blindness in the UK is expected to reach £2.6 billion by 2013, but it is estimated that more than 50 per cent of cases could have been avoided by earlier detection.

A report by Professor Nick Bosanquet of Imperial College in December 2010 made a strong case for using the skills and premises of optometrists to improve NHS eye care services.

'Optometry might not be the answer to everything but it is clear that if we provide eye care services at optometry locations we will be addressing patient needs and ensuring better use of resources.'

'We have an ageing population and an increasing number of people with glaucoma. Optometrists are highly skilled professionals but only get paid for sight tests and then have to refer on.'

The low specificity of diagnostic tests carried out by optometrists means that up to 65 per cent of hospital referrals can be false positives.

But a scheme in Manchester, where referrals were reviewed by accredited optometrists before the patient's hospital appointment, reduced the number of cases reaching secondary care by 40 per cent.

Another referral refinement scheme was introduced in nearby Stockport following the 2009 NICE guidelines that lowered the referral threshold on intra-ocular pressure, creating backlogs at hospital glaucoma clinics.

Patients identified as suspect cases are now tested again in the community using hospital standard equipment and discharged if they fall within normal limits - deflecting 77 per cent of low-risk patients who would otherwise have been seen in secondary care.

'One of the obstacles when introducing refinement services was getting optometrists to sign up. They want people to come into their premises for commercial purposes.

'As GPs, we had a lot to learn about getting involved in commercial services and we still have some way to go.'

Paul Carroll, director of professional services for the Specsavers group, said the commercial aspects of optometry, if properly harnessed by the NHS, could bring extra benefits to patients.

'We are intensely focused on providing what the customer wants, so if there is anything new that meets their needs we want to implement it.

'Providing enhanced services feels intuitively right. We can offer ease of access, a comfortable and familiar environment, friendly appointment systems, and the ability to provide a combination of services in one visit to the practice.'

Merseyside GP and DoH adviser Dr James Kingsland, chairing the debate, said his own recent sight test had made him realise there was scope for expanding services.

'It was open on Saturday, they had super premises, with a spare consulting room, and were involved in screening. It made me think they could easily have had a nurse providing blood pressure checks, audiology, or even GP services.'

Dr Kingsland said there was also a 'huge repository' of largely untapped knowledge in optometry. Stockport optometrist Trevor Warburton said the optical professions could bring a wealth of patient experience to the development of clinical services. 'If you want a weather vane view of how patients are being handled in secondary care, then you can talk to patients but also talk to optometrists, who are seeing the patients and hearing what's happened to them in hospital.'

GPs at the debate complained about the existing system whereby optometrists had to refer to a GP so that they in turn could refer the patient to secondary care.

Buckinghamshire GP Dr Raj Thakkar said: 'More than 90 per cent of referrals come through us, which creates delays for patients and of course extra costs - it's just not necessary.'

Kent GP Dr Rubin Minhas said: 'The GP is adding absolutely zero value at that point but there is a cost. It's only when the patient eventually gets to the hospital that the necessary work can be done.

'I would like to utilise optometrists as much as possible because GPs are often just acting as a very expensive secretarial service.'

But Dr Minhas said that he wanted to see an optimum package of enhanced services that could be implemented around the country, rather than a range of different schemes that were only applicable in certain areas.

Dr Dukes said his commissioning group had used the pathway pack supplied by LOCSU and worked with the local optical committee to develop services.

Katrina Venerus said LOCSU had taken the best features of the referral refinement services operating across the country and created a gold standard pathway for commissioners that had been described by NICE as 'flawless'.

'Eye care should be higher up the agenda. A lot of the issues with enhanced services have already been worked through.

'Our work has been endorsed by NICE but it just needs more exposure and letting people know that it's available to them.'

Calling NHS staff 'heroes' reflected the personal risk and sacrifices they took on...