Short-term fixes are not the solution to seasonal rises in demand, GPs warn. Neil Roberts reports.

As the days slowly begin to lengthen, the annual NHS panic recedes from the front pages.

The winter crisis in the NHS, and the accompanying political rows, are now as much a seasonal tradition as grit shortages and rail chaos. Even as winters become milder, the stress on the health system apparently increases each year.

In recent months newspapers have carried pictures of ambulances queueing outside emergency departments and a tent erected in a hospital car park to cope with patient numbers. While pressure in general practice may not provide such dramatic photo opportunities, GPs are also feeling the strain.

Politicians and much of the media talk about an A&E crisis. General practice is only mentioned as part of the problem: if only GPs would open their doors for longer, fewer people would end up in hospital, the simplistic argument runs.

In reality, the same structural and systemic pressures, combined with the increase in demand that comes with colder weather, affect general practice as much as any other part of the system.

While GPs may accept that general practice should be part of the solution to easing pressure on the wider system, without resources and the workforce, that is not possible.

GP has discovered widespread unfunded requests by commissioners to provide additional capacity. Practices have also come under pressure to take measures such as cancelling staff leave and non-essential work.

Of more than 660 GPs and practice managers who responded to a GP poll in January, 72% said demand for appointments had increased significantly this winter compared with previous years. 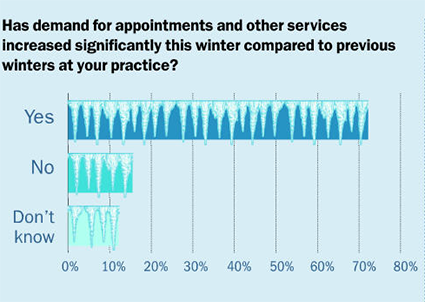 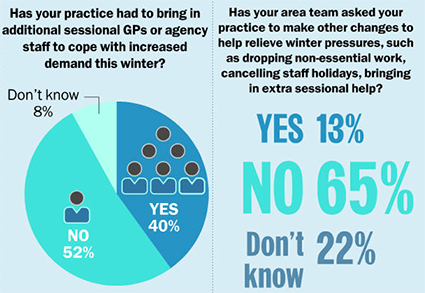 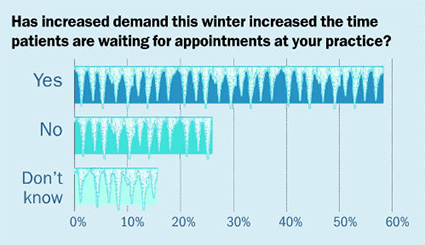 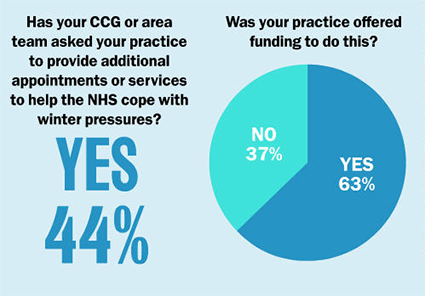 Forty percent said they had been asked by their CCG or area team to provide additional appointments or services to cope with the winter pressures.

Many of those requests will have been funded to some degree, in some cases from the £25m share of winter pressures funding allocated to GP access by the DH and NHS England.

GP has reported previously on schemes in Dudley, West Sussex and East Staffordshire where practices have been paid to provide extra appointments, including on Saturdays, to relieve pressure.

Analysis of how the £700m winter pressures fund was spent shows 63 local system resilience groups - made up of CCGs, NHS providers and social care organisations - invested some funding in primary care. Thirty-five groups invested in specific GP schemes, such as additional appointments or GPs in A&E.

But the GP poll found 37% of respondents who had been asked by commissioners to provide extra access were not offered any funding to do so.

A total of 13% had been asked by NHS England to make other changes to help relieve winter pressures, such as dropping non-essential work, cancelling leave and bringing in additional sessional help.

'I would hope we are not seeing people putting in their own money to fund locums to manage winter workload when they are already overworked, but I suspect we are,' says Londonwide LMCs' chief executive Dr Michelle Drage.

While there is a natural spike in demand in winter as people are more likely to be ill, Dr Drage says, current winter pressures come 'on a background of everything being worse in the first place'.

'In the face of this surge in demand we don't have the mechanism for increasing supply of doctors and nurses, so something has to give,' she says. 'The worry is what gives is GPs' stress levels.'

GPC deputy chairman Dr Richard Vautrey suggests the effect of the year-round increase in workload is that many practices see no seasonal spike, just a relentless rising demand.

'In many ways winter pressures is a real misnomer,' he says. The focus by commissioners and politicians on resolving the 'winter crisis' is politically motivated by those who want to avoid negative headlines, particularly in the run up to an election.

'It is very easy to get lulled into the idea that winter is the peak period and then ignore the rest of the year,' Dr Vautrey says. 'That is where we end up making big mistakes. We have to invest throughout the year so we can deal with the pressures whenever they happen.'

Some of those surveyed agree. 'Demand is high year-round,' said a GP in Yorkshire. 'Demand didn't go down over summer this year,' said another.

Others said winter pressures had increased waiting times for appointments, some by up to two weeks.

Some GPs identified a spike in flu-like illnesses this winter due to the ineffectiveness of this year's vaccine.

Derbyshire Health United (DHU), a GP-led urgent care and NHS 111 provider, has been highlighted by the BMA as an example of primary care clinicians leading the way in responding to winter pressures.

Its care plans for 11,500 people vulnerable to hospital admission are drawn up by patients' GPs but accessible across local health services so clinicians can provide more appropriate care.

DHU's clinical director Dr Aqib Bhatti said the service had seen unprecedented demand this winter, with average call rates up from around 5,000 on a typical Saturday to a peak of 8,000 on the Saturday after Christmas. That compares with 6,500 on the same day last year.

Dr Bhatti said that despite the exceptional demand DHU coped well. Because the non-profit, GP-led provider has good links and relationships with both practices and commissioners, he says, it is able to effectively plan, staff, and access additional funding to cope with spikes in demand.

A well run, GP-led urgent primary care service, says Dr Bhatti, is key to reducing pressures on both acute and general practice services, and additional winter funding is vital for that.

GP practices, he points out, cannot take on any more work, so additional seasonal funding for them is beside the point. 'My partners don't want to do any more work because they're inundated, they are burnt out. You can offer them whatever. They can't do it.'

Dr Vautrey argues that the annual injection of winter pressures funding is not a sustainable solution without more GPs and practice staff.

What little winter pressures funding does make it to general practice, he says, is used for short-term fixes that are there to avoid politically embarrassing crises.

In addition, the seasonal influx of cash as winter approaches has a distorting effect on health economies: 'It creates this expectation among commissioners that you can just throw some money and people will expand and work a little bit longer.'

GP access schemes set up with Challenge Fund cash have diverted GPs from out-of-hours services to extended hours in practices. 'We have just robbed Peter to pay Paul.'

Dr Vautrey says the only long-term solution to the capacity crisis is proper investment in workforce.

Dr Drage agrees, and says CCGs should do more to commission services in and around practices to ease pressure. 'There is no slack in the system. We do need some slack otherwise it doesn't take much for something to fall over.'

Government support for GPs has been consistently 'behind the curve' as practices...

Four out of five GPs have struggled to provide sufficient levels of care to patients...