A GP trainee who needs a bone marrow transplant within months to beat cancer has appealed for more people to join the list of potential donors.

North Londoner Dr Tania Ba-Obeid was diagnosed with cancer just after her 30th birthday in December 2012.

After chemotherapy to treat the cancer – an aggressive form of diffuse large B-cell lymphoma – she was told she was in remission.

Months later the cancer returned, but after further chemotherapy and a stem cell transplant, Dr Ba-Obeid again believed she had beaten it.

But after marrying architect William Ringer in July this year, the GP trainee noticed tell-tale symptoms indicating the cancer had come back. 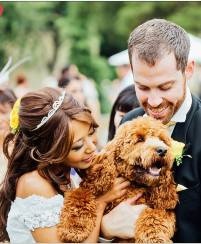 ‘I remember sitting at the top table at the wedding thinking that the cancer had gone and that it would not be back,’ said Dr Ba-Obeid.

‘After two years of chemo and two relapses my life is now on hold and the priority is just to stay alive.’

Doctors have told her she now needs a bone marrow transplant, but her heritage will make it difficult to find a suitable donor.

Dr Ba-Obeid’s mother is Filipino, and her father is from Yemen and half Indonesian.

Tests found that Dr Ba-Obeid’s only sister was not a match for her as a potential donor.

‘Being of an ethnic minority in England, I always knew the odds were against me to find a donor,’ she said. ‘I hope that by sharing my story I will be one small step towards getting closer to finding a donor.

‘If anyone is thinking of joining I would say: "Don't think about it - just do it". It would mean the absolute world to me.

‘It would mean the difference between living a life and not. It would mean more to me than they could ever know.

‘People should realise that by simply registering they can make a profound difference to people in my position.’

Blood cancer charity Anthony Nolan is now searching its register, as well as the international bone marrow donor registers, in the hope of finding a potential donor for Dr Ba-Obeid.