GP-led triage in hospital A&E departments can improve patient outcomes and save enough emergency appointments to free up a day's worth of workload for two to three A&E doctors a day, say GP researchers.

Over four weeks, researchers – led by medical student Fahima Begum – assessed a GP-led triage service in the A&E department at St George’s Hospital, London. The south London hospital's A&E department is 'among the busiest in the world' according to its website, seeing around 350 new patients per day.

Under the scheme, which ran from 9am-5pm on weekdays, a GP worked at the front door to filter out patients that could be seen in primary care. Patients without clinically obvious A&E symptoms were ‘cherry picked’ to go through triaging instead of waiting to see an A&E doctor.

The scheme ensured patients access medical professionals who can provide the best care suited to their problem and stopped A&E getting clogged up with inappropriate cases, allowing doctors to see more patients requiring emergency attention.

GP Dr Hamed Khan, who also worked on the study, told GPonline: ‘We tried to redirect 15 or more patients a day. Often we did up to 25 or 30. To put that into perspective, an A&E doctor might see between eight and 12 patients a day, so we’re freeing up potentially two to three A&E doctors a day.’

Over half (56%) of those redirected were sent to their usual GP, 32% to out-of-hours GP services and 10% to walk-in centres. Others were redirected to other appropriate services, such as a dentist or optometrist.

All were given a same-day appointment, co-ordinated by an administrator, with many booked in to see a GP within a few hours – often sooner than they would have seen a doctor in A&E.

Crucially, the results show that patients were highly satisfied with the service, said Dr Khan. Of the 150 patients redirected in the study, 83% rated it a four or five out of five for satisfaction.

Patients were often ‘very happy’ to be given an appointment, as it meant that they did not have to wait ‘indefinitely’ to see a doctor in A&E. 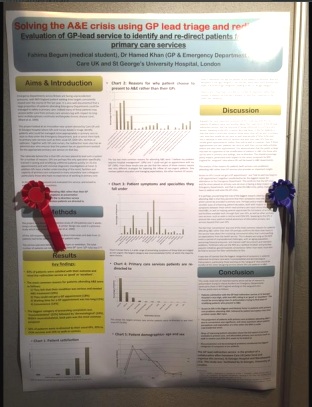 A fifth (19%) said they thought their condition was serious and needed A&E care, suggesting patients need better education on what GPs can provide, Dr Khan said. Another 14% said attending A&E was more convenient.

The most common reason for inappropriate A&E attendances throughout the study was musculoskeletal problems (21%) followed by dermatological problems (14%).

‘My insight of working in a practice and working in 10-minute consultations helped me provide this service,’ said Dr Khan. ‘We have a unique skillset – we see patients, take histories, understand their narratives and unify all of that to make a diagnosis. And we do all of that within the space of 10 minutes, so we can make snap decisions if a patient is at risk of becoming unwell.

‘I’m very keen to see the scheme rolled out in most – if not all – A&Es, and I think it will fulfil a very important role. Not only will it ease waiting times, it will also provide patients with better care, because problems that can be treated better in primary care will be seen in primary care rather than by a junior A&E doctor that has little experience in these problems.

‘This isn’t a model that is absolutely new. In the Netherlands, all patients have to see a GP before going to A&E.  This thinking is tried and tested in other parts of the world, and the results of this study are very promising.’

The scheme was run in collaboration between St George’s Hospital, the University of London and KUK, an out-of-hours company commissioned by Wandsworth CCG.

The research won best poster prize in its category at the RCGP annual conference in Glasgow last week, fending off over 250 competitors for the top honours.