The GMC has had a busy year, but there are now growing concerns about the 'creeping extension' of the regulator's role.

The financial year that has just drawn to a close has not been the smoothest for the GMC.

In 2014/15, it had to prove in the High Court that it did not discriminate against black and minority ethnic students, deal with a mounting influx of complaints from a social media savvy generation of patients, and face up to added scrutiny of its procedures and their impact on doctors.

It also gained the power to ban EU doctors with poor English-speaking skills and impose stricter sanctions for doctors who make mistakes and later fail to apologise.

Some doctors, and the groups that represent them, have started to express concerns that the GMC is gradually moving 'beyond its remit' - to the detriment of doctors' health and wellbeing.

Although calls to declare that the GMC was 'inhumane' and 'failing doctors' were rejected at the Scottish LMCs conference last month, the fact the proposal was approved for debate and garnered a not- insignificant number of supporters speaks volumes.

The expanding role of the GMC was especially apparent in March, as it was granted further powers to appeal against decisions made by the Medical Practitioners Tribunal Service (MPTS) in fitness to practise panels.

The Medical Protection Society (MPS) says this is just the latest in a string of moves that reveals the 'creeping extension of the GMC', and warns it should not have been given this power.

The BMA also has concerns. 'How can doctors have confidence in the independence and fairness of the MPTS if the GMC does not, and can override its decision by going to a different court?' BMA chairman Dr Mark Porter asks.

'Recent research has exposed the huge stresses experienced by doctors undergoing GMC investigation, with a number reporting thoughts of self-harm or suicide, depression and anxiety. Any process that establishes double jeopardy for doctors who have been found innocent of charges is neither fair nor proportionate,' he says.

The GMC has admitted its support structures must improve, and received praise after its own report uncovered the extent to which its fitness to practise investigations affected doctors involved.

It revealed 28 suicides among doctors who were under investigation between 2005 and 2013.

But Dr Pallavi Bradshaw, a medico-legal adviser at the MPS, says it seems as if the GMC has 'gone away from its initial remit' of being there to regulate the profession 'to being there to punish doctors'.

Unsurprisingly, the GMC disputes this, and the regulator's annual statistics do show that the number of doctors it has removed from the register has fallen year-on-year, from 92 in 2010 to 64 in 2013, suggesting that fewer doctors are receiving the strictest punishments.

Over a similar timeframe, the regulator says it has seen 'a doubling of complaints against doctors', which will inevitably lead to more cases being pursued.

But the MPS argues that the GMC has begun to subject more doctors to fitness to practise investigations inappropriately, needlessly putting doctors' health at risk.

Many cases that are taken to tribunals result in no action being taken, suggesting that they could be directed to, and dealt with by, local complaints processes instead.

'Half of GMC investigations run and no action is taken against the doctors' registration,' says Dr Bradshaw.

'From our perspective, this means the initial screening and triaging process isn't effective, and it is not really thinking about whether those complaints are indeed something the regulator should be looking at.'

It should be looking at only 'the most serious of issues', Dr Bradshaw adds. 'If complaints have come from an employer, those are the sort of things the GMC should look at.'

She says it is less appropriate for 'simple' complaints directly from patients, for example to do with a GP's manner or one-off concerns, to be taken directly forward as fitness to practise issues by the GMC.

GMC chief executive Niall Dickson admits this is one area where it can improve.

'Some of the complaints we receive should be dealt with at a local level,' he tells GP. 'This is an area we're working on.

'We have taken forward a raft of reforms to help us deal with some of these cases earlier, and last year we transferred a whole category, which means more than 1,000 cases have in effect been transferred from the GMC to local level.

'We would like to go further, but are constrained by our current legal framework.'

The MPS also levels claims that the impartiality of GMC investigations is being 'influenced' by the GMC's perception of how the national media and the public will react, allegations that the GMC says are 'totally wrong'.

Dr Bradshaw says: 'A lot of the time the GMC seems to have one eye on what the tabloid newspapers will think about a particular case, rather than what members of the profession think of the issue.

'I think sometimes it sees its role being to act as a deterrent, so it will sanction people. One of the terms it uses is that this is to "send a message out to the profession" and to instil confidence in the public, which in certain circumstances you need to do, but I think it relies on that a lot.'

The GMC says it is mandated by parliamentary law to protect the public and 'to maintain public confidence in the profession'. The public has to know doctors will be held accountable when they bring patients to harm, Mr Dickson says. 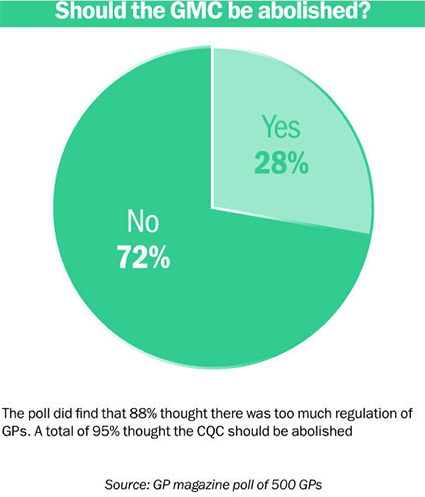 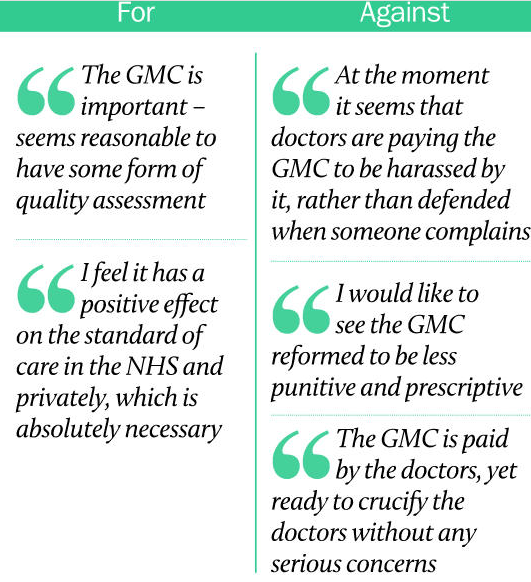 'Parliament and the courts have made clear there is an element of accountability - so, in simple terms, when a doctor has harmed patients knowingly or where they should have known they were causing that harm, there is an element of accountability required to maintain trust and confidence in the profession. It is in the interest of all doctors that the small number who put patients at risk are held to account for their actions.'

In a GP poll of more than 500 GPs, over a quarter (28%) said they were in favour of the GMC being abolished, with respondents saying they felt 'overregulated' and 'unsupported'.

The GMC says it has been transparent over some of its shortcomings, and is working to improve them.