Recent research of interest to GPs.

0.25 CPD Credits
Reflect on this article and add it to your CPD orgnaniser on MIMS Learning

Guidelines do not currently advise the introduction of allergenic foods early in infancy. However, this systematic review suggests that introducing egg or peanut to the infant diet may be associated with a lower risk of developing egg or peanut allergy.

Study design
This systematic review consisted of a meta-analysis of 146 intervention trials and observational studies over 70 years.

The review considered evidence that the timing of allergenic food introduction during infancy influences the risk of developing allergic or autoimmune disease.

Key findings
There was moderate-certainty evidence from five trials that egg introduction at the age of four to six months was associated with at least a 30% reduction in egg allergy.

There was moderate-certainty evidence from two trials that peanut introduction at the age of four to 11 months was associated with at least a 30% reduction in peanut allergy.

The findings of this systematic review must be considered in the context of limitations in the primary studies. Further trials are needed to quantify the treatment effect.

The small number of studies in this review for egg and peanut allergy were statistically significant and are consistent with a large body of experimental data in animal models. Following this research, we should consider advising early introduction of allergenic foods, if appropriate.

We know there is an association between the use of NSAIDs and increased risk of heart failure, but we do not understand the relationship between dose and risk associated with individual NSAIDs.

The use of 23 traditional NSAIDs and four selective COX-2 inhibitors was considered. The endpoint was an initial hospital admission for heart failure. The dose-response relationship between the use of an NSAID and heart failure was also assessed.

Risk of heart failure doubled for diclofenac, etoricoxib, indomethacin, piroxicam and rofecoxib, used at very high doses. There was no evidence that celecoxib increased the risk of admission for heart failure at common doses.

This study has shown an increased risk of hospital admission for heart failure with use of specific NSAIDs. The risk varies between individual NSAIDs and the effect is dose-dependent.

Implications for GPs
NSAIDs – prescribed and OTC – are commonly used and we have long known the associated risks. However, this study has defined the risks of heart failure associated with specific NSAIDs and the effect of dose on risk.

We should review our use of NSAIDs and COX-2 inhibitors in all new users, as well as susceptible patients, and use the lowest effective dose in those patients for whom we continue to prescribe.

Early use of antivirals in severe Bell's palsy3

The early management of patients diagnosed with Bell’s palsy has long been debated, with a lack of real evidence to support the use of anti­viral agents in addition to corticosteroids.

Study design
This paper summarises a Cochrane review that evaluated antivirals versus placebo or no treatment among patients with Bell’s palsy taking oral corticosteroids. The review looked at 1,315 patients involved in eight RCTs between 1994 and 2011.

Key findings
The addition of an antiviral agent (aciclovir, valaciclovir or famciclovir) to oral corticosteroids was associated with lower rates of incomplete recovery and long-term sequelae at three to 12 months compared with oral cortico­steroids alone. The NNT for complete recovery after three to 12 months was 19 patients. This paper has shown that use of antiviral agents in addition to corticosteroids is associated with improved outcomes in patients with Bell’s palsy presenting within 72 hours of onset.

Implications for GPs
This study suggests that we could consider giving an antiviral agent in addition to cortico­steroids in patients presenting within 72 hours of onset of symptoms of acute idiopathic facial nerve palsy.

However, the quality of the evidence in these trials is low and none included children. The paper does not provide sufficient leverage to change current practice overall, but we may consider antivirals in more severe cases.

There is an obesity epidemic and as a result, many wearable technologies specific to physical activity and diet have been developed.

Sustaining weight loss can be a challenge and wearable technologies may provide a method for improving long-term weight loss for patients who are overweight or obese. 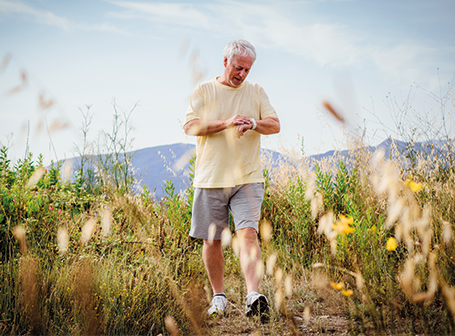 However, it has been unclear whether these devices offer an advantage over standard behavioural weight loss approaches.

Participants were aged 18 to 35 years with a BMI ranging from 25 to less than 40. The primary outcome of weight loss was measured at six-monthly intervals, over 24 months. Secondary outcomes were body composition, fitness, physical activity and dietary intake.

Key findings
Both the standard intervention group and the technology-enhanced group, who were provided with a wearable device, had significant improvements in body composition, fitness, physical activity and diet.

There was significantly lower weight loss at 24 months in the wearable technology-enhanced group than in the standard intervention group.

Implications for GPs
The prevalence of obesity in young adults compared with children and middle-aged adults suggests that young adulthood is an important transition period for weight gain.

This trial demonstrates that the use of wearable devices may not offer an advantage over standard behavioural weight loss approaches. But in the current climate, we should encourage patients to use whatever methods are acceptable to them in the long term.

Heavy menstrual bleeding (HMB) is a common and debilitating problem. It significantly affects the lives of 25% of women aged 18-54 years, leading to 1m UK primary care consultations and 12% of all gynaecology referrals.

Key findings
At five years post-randomisation, MMAS scores improved significantly in both groups (from 40/100 to >80/100) and the difference between the two groups was not significant. Rates of surgical intervention were low in both groups and there was no difference in generic quality of life, sexual activity scores or serious adverse events.

Implications for GPs
This study shows that initiation of the usual medical treatments or the LNG-IUS in general practice can safely help women with HMB.

Five previous trials have found the LNG-IUS more beneficial than other treatments at two years. The decision about which treatment to use should take into account the individual patient’s preference for oral treatments or insertion of an IUS, and their changing needs for contraception and fertility.