Nearly half of practices in the UK have seen income from private and professional fees fall in the past year, according to a survey of 568 GPs and practice managers.

A total of 47% of respondents said income from these sources had fallen. Just 6% said private and professional fees income had risen in the past 12 months.

In parts of the UK, up to two thirds of practices reported a decline in income from fees. The losses compound falling income across the board as expenses rise and GP funding remains frozen.

The survey was carried out by GP's new sister website, Medeconomics, which launched this week (see below). 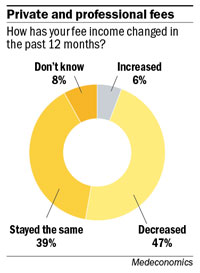 Responding to the findings, GPC negotiator Dr Peter Holden said: 'It's volume that is down, not prices. The problem is that a lot of what GPs do is insurance reports and that is directly related to the housing market.

'Many people are not moving, or have decided life insurance is a luxury they will do without.'

Dr Holden said many practices were 'lax about charging'. 'There is a reticence among doctors in general in this country to ask for money,' he said.

'Practices are going to have to diversify; there is a reduction in payments across the board.'

He agreed that insurance reports and other housing reports had fallen 'considerably': 'Part of that may be a slump in the market. There is also a trend for companies to ask fewer questions.' He said increasingly rather than paying for practices to complete reports, firms simply asked for relevant information from patient records for a lower fee.

He urged practices to be proactive: 'We are in a much tighter financial environment. The fees you get from private work are not just going to arrive on your doorstep.'

The poll found 33% of practices planned to take steps to increase income from private and professional fees.

Respondents said they planned to increase fees, advertise their services more, be consistent about charging and offer occupational health medicals or cosmetic injections.

Practices in the East Midlands were most likely to suffer a fall in income, with 66% affected. The decline was least marked in London, where 35% of practices reported a fall.

The survey also collected information on the average rates charged for the most commonly used 'negotiable' private and professional fees. This has been used to develop an improved Database of GP Fees to help practices benchmark their earnings, which can be found at medeconomics.co.uk.

Calls for general practice to offer face-to-face appointments to all patients who...

Staff at a primary care network (PCN) in Cornwall have committed to reducing their...

Repeat prescribing and use of structured medication reviews in general practice are...