Falling GP numbers, a huge real-terms decline in income for the profession over the past decade and a sharp drop in the number of sessions GPs work are highlighted in government evidence to the body that advises ministers on doctors' pay.

Evidence to the Doctors and Dentists Review Body (DDRB) - the independent body that advises the government on pay for medical professionals - from Jeremy Hunt's newly renamed department of health and social care (DHSC) highlights many of the key factors behind the crisis facing general practice.

It acknowledges falling numbers of GPs, the sharp decline in average GP income over the past decade, a steady fall in numbers of sessions GPs tend to work, and a shift away from partnerships to locum and salaried roles.

Figures submitted by the DHSC also show that the number of GPs taking early retirement has doubled in recent years, although many of these may remain within the active workforce. 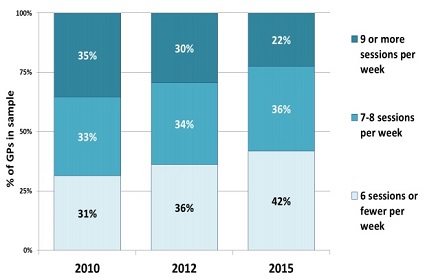 The DHSC evidence warns: 'Many practices continue to face recruitment issues, and newly qualified GPs are often working as locums rather than joining a practice as a permanent GP.

'Some older GPs are also leaving the profession early. This is leaving a gap between the number of doctors practices want, and the numbers they are successfully recruiting and retaining.'

The evidence points to plans to boost international recruitment, retention schemes, the expansion of GP training posts, GP Forward View funding, new care models and plans for a state-backed GP indemnity deal announced last year by the health secretary as part of its strategy to turn the situation around.

But the BMA has warned repeatedly that general practice in England will remain underfunded by £3.4bn by 2020/21 even if GP Forward View investment is delivered in full - and increases in GP funding in recent years have barely kept ahead of inflation.

Evidence submitted by the DH also shows the extent to which soaring pressure on general practice has driven GPs into cutting back on the number of sessions they work. In 2010 less than a third of GPs worked six sessions or fewer per week, whereas by 2015 this figure had risen to 41%, while the proportion working more than 9 sessions per week fell from 35% to just 22%.

The BMA said it would submit its own evidence to the DDRB once evidence had been submitted by all four UK governments.

The government has suggested it will take a 'more flexible approach' to public sector pay for 2018/19 after several years of restraint. Negotiations between the BMA and the DHSC over the GP contract for next year are continuing.