Rising bureaucracy and longer working hours are leaving one in three GPs unhappy with their work/life balance, a GP survey of more than 1,600 GPs has found.

Of 1,659 GPs who responded to the poll, 33% said that they were 'not very happy' or 'very unhappy' with their work/life balance.

A further 31% said their work/life balance was just 'satisfactory'. A total of 85% of GPs said the amount of administrative work they did had increased in the past year.

Half of GPs responding to the survey said workload had put 'unreasonable pressure' on their personal relationships.

Secretary of Northumberland LMC Dr Jane Lothian said that administrative pressures on GPs had recently become a lot worse. 'The general feeling is that the work is just spiralling out of control,' she said.

GP partners in particular have seen their workload increase, she said. 'The pressure put on partners has gone up, the working day has become open ended,' she added.

Among partners responding to the GP survey, 93% said the administration they had to undertake had increased over the past 12 months.

Family Doctor Association chairman Dr Peter Swinyard said that administration and workload had 'definitely' increased over the past year. 'The QOF has been more difficult, PCT micromanagement of practices has increased,' he said. 'Some practices are also working towards clinical commissioning groups, which is an enormous added burden.'

GPC deputy chairman Dr Richard Vautrey said: 'More GPs are now deciding the work/life balance is more important than the financial benefit of working full time, this combined with pension changes means that more GPs are cutting back their hours.'

Compared with partners, locums and salaried GPs reported a better work/life balance and said they spent more time with patients.

But almost 70% of locum and salaried GPs said they would be concerned about taking on a partnership due to increased workload pressures.

National Association of Sessional GPs chairman Dr Richard Fieldhouse said locums were more often able to see the 'nice aspects' of patient care while partners sat in 'this meeting or that meeting'. But such freedom came at the expense of being excluded from commissioning groups, he said.

Shadow health secretary John Healey said: 'David Cameron said he was abolishing NHS bureaucracy, but this survey shows that family doctors are being taken away from patients to cope with his huge reorganisation.

'Despite the spin, the Tory-led government is ploughing ahead with changes to the NHS that doctors have opposed from the start. Patients want their doctors to be doctors, not accountants.'

Responding to the GP survey a spokesman for the DoH said: 'The Department is committed to empowering general practice to make things better for patients and the NHS.

'Through systems developments such as electronic prescribing, choose and book and on-line booking of appointments, GPs can reduce bureaucracy in their own practice and more widely, making savings, reducing costs to themselves and delivering improvements for patients.' 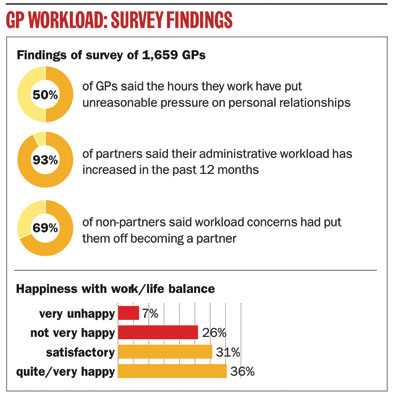