GP practices tend to perform differently in CQC inspections depending on whether they hold a GMS, PMS or APMS contract, a GPonline analysis of almost 1,800 practices has revealed.

The analysis shows that APMS practices appear to be three times as likely to be given the top rating of ‘outstanding’ as practices on either a PMS or the national GMS contract.

APMS practices are almost half as likely to be given the lower ratings of ‘requires improvement’ or ‘inadequate’ (10%) as GMS practices (19%), although a slightly higher proportion of APMS practices have been given the bottom-rung rating so far.

Practices under each of the three contract types were similarly likely to be rated ‘good’, with 80% of APMS, 78% of GMS and 82% of PMS practices receiving the most common rating. 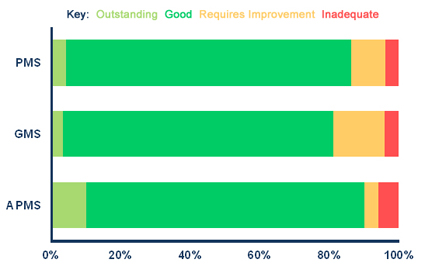 But GPC deputy chairman Dr Richard Vautrey said the results were further evidence that the CQC’s one-size-fits-all rating system is ‘far too simplistic’, as it does not take into account the differences in practices' circumstances.

‘We need to ensure that we have a level playing field before we start judging one practice against another,’ he said.

‘If you look at the funding that APMS practices get per patient, they get significantly more than GMS and PMS practices, so you'd expect them to be doing more for the amount of funding that they get.

‘Many GMS practices in particular have been underfunded for many, many years, and can only dream of having equivalent levels of funding.

‘In some cases, APMS practices have been established to focus on a particular area of work, so it might be a homeless area or a particular population with specific needs, and CQC are then seeing that as "outstanding" – when in fact that is what the practice was set up to do.

‘While it’s good that 85% of practices are being found to be "good" or "outstanding", that’s really telling us no more than we knew already, for example through the national patient survey.

‘Even with that aside, looking at this data to draw meaningful conclusions about variation in performance is difficult. The number of APMS practices presented here are much smaller than the other two types.

‘It’s therefore difficult to draw any firm conclusions at this stage.’

A GPonline investigation earlier this year revealed a strong correlation between lower funding and poor CQC ratings for GP practices.