A DH scheme to roll out telehealth across England is struggling to recruit patients and pathfinder CCGs are pulling out because of concerns about cost-effectiveness, a GP magazine investigation reveals.

But data from 26 pathfinder CCGs in these areas show just 2,368 patients were actively using the health-monitoring devices in September, suggesting the DH will fall well short of its target.

Some CCGs meant to be pioneering uptake under the DH ‘3millionlives’ telehealth initiative have refused to commission services or will not renew contracts after questioning potential savings.

The initiative, launched in January 2012, aims to roll out telehealth to 3m patients by 2017. GP leaders criticised the government for setting an ‘arbitrary and political’ target.

The national picture remains patchy, with CCGs in some areas planning to expand their use of telehealth. NHS England insisted 3millionlives was ‘progressing well’ under its control, even though the telehealth industry admitted the scheme had ‘stalled’ in 2013.

Findings from the DH-funded Whole System Demonstrator (WSD) trial of telehealth and telecare found that despite benefits to patients’ health, telehealth services were unlikely to be cost-effective for the NHS unless costs fell considerably.

GP’s investigation found 108 of 176 CCGs that responded to a Freedom of Information request have commissioned telehealth services. These CCGs plan to spend an estimated £15.2m in 2013/14.

Six of 26 pioneer CCGs that responded are not commissioning telehealth. In one pioneer area, Worcestershire’s three CCGs and the local council decided to withdraw a joint tender for telehealth after failing to find a suitable service.

Dr Richard Harling, director of adult services and health at Worcestershire County Council, said: ‘None of the companies bidding was able to offer an arrangement that was acceptable. In particular, it was not clear to the local NHS that the contract would be cost-saving in [the] long term.’ 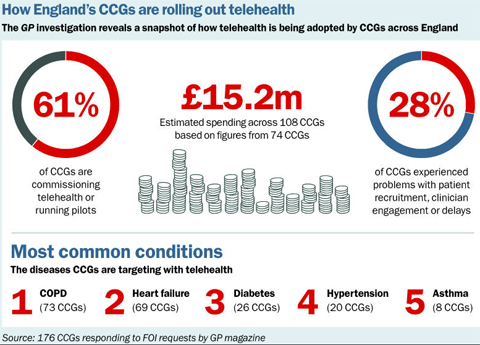 Another 3millionlives pioneer, East Ridings of Yorkshire CCG, said it was planning to decommission its telehealth service following a review.

In many areas of England, CCGs reported fewer patients using telehealth devices than they had anticipated.

Medway CCG in Kent inherited equipment used in the WSD trial and expected 250 patients to be set up by September. But GP was told that just 19 people were using the devices by this time. The CCG blamed equipment delivery delays and a slow start to its pilot scheme.

North Kirklees CCG in Yorkshire said deployment had been ‘hampered by various issues’. A spokesman said its equipment needed updating and a new strategy was required.

Commissioners in Bedfordshire CCG had planned to add 312 new devices to the local scheme over the next two years. But a review found that targets and savings outlined in the business case had slipped, and the service has now been ‘capped’ until the contract expires in August 2014.

GPC chairman Dr Chaand Nagpaul said: ‘The difficulty is, telehealth was introduced as a political imperative and the agenda is driven by hasty implementation in many areas.

‘It’s pretty unhelpful to have arbitrary targets. That’s not the way to achieve meaningful change.’

A spokeswoman for NHS England said it was confident of meeting the 3m patient target. It has reviewed the scheme and an announcement on its future was due as GP went to press.

A spokeswoman for the Telecare Services Association said: ‘3millionlives stalled in mid-2013 with the changeover to NHS England. We believe it is now back on track.’