Practices are facing a huge rise in patient registrations, with average list sizes increasing by up to 500 patients in some CCG areas in the past 18 months, a GP magazine investigation has revealed.

Between April 2013 and October 2014, practices in the Cambridgeshire and Peterborough CCG area saw an increase of 25,789 registered patients - 239 more per practice.

Over the same period, Health and Social Care Information Centre data show the number of registered patients at practices in Tower Hamlets, east London, rose by 17,584.

The surge added an average 488 patients per practice in the area and represented a 6.4% increase in the area's total patient population.

Find out how your CCG is affected

An increase of 12,142 patients during that period in Brent, north-west London, added 181 patients per practice, and a rise of 7,845 patients across Dartford, Gravesham and Swanley CCG in Kent boosted average lists by 231 patients.

Milton Keynes CCG saw practices register an extra 7,055 patients in 18 months, an increase of 2.6% in the patient population. 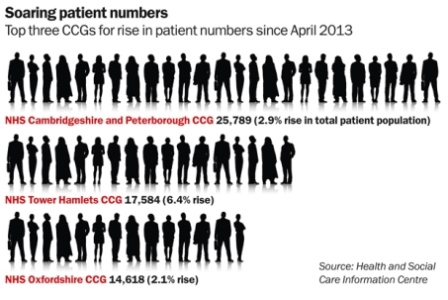 Londonwide LMCs medical director Dr Tony Grewal said he was unaware of the huge rise in patient numbers and no extra help for practices had been provided.

He called for a one-off 'registration' payment to help practices dealing with such a large increase in patient numbers.

'Recent research suggests that in London, the average patient will use as much practice resource in their first year after registering as for the whole of the rest of their time registered with that practice,' he said.

'It would make sense for this to be recognised, ideally as a new patient registration payment.'

'It's likely to accelerate and that may become a problem for health services locally in the future, and not just primary care,' he said. GPs were considering closing lists and there were the 'usual problems' with recruitment and retention, he added.

'Practices would normally see an increase in their list size as a positive, but I'm not sure they would in the current circumstances,' he said.

'There are no local schemes, perhaps there should be.'

'We have a growing population across the country, but the relative NHS funding for general practice has been cut, rather than increased, so it's no surprise practices are under so much strain,' he said.

'We need urgent funding put into global sum and PMS baselines, which have been frozen for far too long, to pay for core general practice to meet the needs of the growing population, rather than prioritising other schemes, as we've seen with the Challenge Fund.'

GPs face pension tax penalties worth 'half their post-tax income'

Rapid swings in inflation could leave GPs facing pension tax penalties worth 'half...

The BMA is set to demand significant pay rises for all doctors to undo over a decade...

Reporting a crime in the practice – the confidentiality dilemma

With incidents of aggressive behaviour from patients on the rise, Dr Emma Green,...

The GMC has admitted a medical tribunal was wrong to suspend a Manchester GP for...

The government is exploiting doctors' goodwill while persistently failing to adopt...