Elderly patients are waiting up to a year for a dementia diagnosis and GPs warn efforts to identify more cases may push NHS services to breaking point, a GP magazine investigation has found.

A formal diagnosis from a memory service, following a GP’s referral, allows patients with dementia to access NHS treatment and support.

The Alzheimer’s Society said delays can increase anxiety among patients and families and stress for GPs trying to support patients in primary care.

The Unlocking Diagnosis report by MPs in 2012 found many memory services were ‘overstretched’ and had waiting times of several months to more than a year.

They warned services might be ‘overwhelmed’ if there was a large increase in undiagnosed patients referred.

Findings from 145 CCGs obtained by GP under the Freedom of Information Act show patients continue to face a long wait to access memory services after GP referral.

In May 2013, patients waited more than six weeks in 37 out of 97 CCGs (38%) that supplied figures. Six weeks is the maximum waiting time advised by the Royal College of Psychiatrists.

Ten CCGs had waiting times of more than 12 weeks, including three where patients had waited six months. Yet waiting times elsewhere were as low as one week, reflecting a postcode lottery for access. 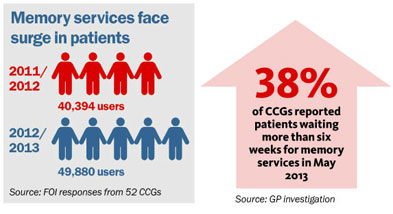 A spokesman for Avon and Wiltshire Mental Health Partnership NHS Trust said the aim was to clear the backlog by late September.

CCGs expect the surge in patients needing assessment for dementia to continue as the population ages. Three Leicestershire CCGs are planning for a fourfold rise in patient contacts by 2017/18.

Only one in five memory service providers have sought RCPsych accreditation to show they meet national standards, with some refusing to do so because of costs.

GPC deputy chairman Dr Richard Vautrey said: ‘Waiting for this length of time with the fear of dementia hanging over you is unacceptable.

‘We have warned NHS England and the DH that the area to focus on is not what happens in general practice but the lack of capacity of memory and support services.’

DES 'will strain services'
Surrey GP Dr Martin Brunet, who opposed the dementia DES, said problems with waiting times have been ignored. ‘All the rhetoric is on early diagnosis, with the emphasis on finding new cases rather than removing delays to diagnosis.’

George McNamara, head of public affairs and policy at the Alzheimer’s Society, said it was ‘shocking and unacceptable’ that long waiting times persisted a year after the MPs’ report.

'With GPs increasingly being encouraged to spot the signs of dementia in their patients, it’s vital that ongoing support is in place for those once diagnosed too. More investment into memory clinics is needed to help them provide a consistently effective service; gaining accreditation and maintaining acceptable waiting times.'

National clinical director at NHS England Professor Alistair Burns said: ‘Ensuring people with dementia receive a timely diagnosis is a key priority for NHS England. There is still too much variation in waits for memory assessment services.’

'We are working closely with partner organisations including the DH, Public Health England and the BMA on a number of work programmes that will help support CCGs, who are directly responsible for local commissioning of dementia services, to improve access to services and the quality of care and support for people with dementia.'

The government has outlined plans to provide 'an uninterrupted supply' of PPE during...

Four in five GPs say their practice is currently facing levels of workload that are...

Medeconomics Live: Bringing you the latest in practice management thinking