Errors by schemes that scrutinise GP referrals have delayed care and breached patient confidentiality dozens of times in the past year, a GP investigation reveals.

Controversy over this form of intensive referral management has prompted GPs to call on NHS England to review whether the schemes improve clinical care and represent value for money for the NHS.

CCGs are increasingly using the approach to curb demands on secondary care and drive the patient choice agenda.

A GP survey in May found 62% of GPs agreed referral management was eroding their professionalism. At the time, GPC deputy chairman Dr Richard Vautrey said it created ‘an unnecessary barrier between GPs and consultants’. 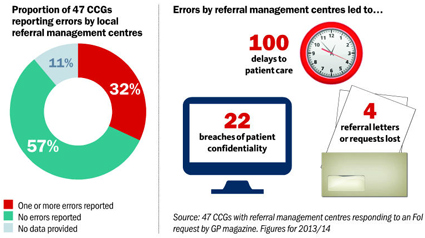 Details from 182 CCGs responding to Freedom of Information requests show 47 CCGs (26%) commissioned a referral management centre in 2013/14, spending at least £11.7m in the process.

One-third of these CCGs (32%) reported one or more errors had been made by centres processing referrals in 2013/14.

This included a total of 100 cases where errors had caused delays to patient care, and a further four episodes where referral letters had been lost. There were also 22 breaches of patient confidentiality.

NHS Telford and Wrekin CCG in Shropshire reported four delays to care and 11 breaches of confidentiality out of 43,474 referrals assessed by the Telford Referral and Quality Services scheme in 2013/14.

The CCG described the incidents as ‘an isolated case’ and said they were reported in line with information governance rules. A spokesman said further steps to improve governance had been taken.

Errors at the Brighton & Hove Integrated Care Service led to 60 cases of delays to patient care and three breaches of confidentiality among 67,800 referrals assessed in 2013/14.

A spokeswoman for NHS Brighton and Hove CCG said handling referrals safely and swiftly was the service’s ‘number one priority’. The incidents were investigated and deemed to have a ‘low or very low impact on patient safety’, she said.

Errors reported by CCGs represent a fraction of all referrals assessed by these centres in 2013/14. Nevertheless, medico-legal experts urge caution. Dr Sally Old, medico-legal adviser at the Medical Defence Union, said the centres have responsibility for a referral once it is received, but GPs may bear some liability.

One in 23 referrals (4.4%) made by GPs to these centres were returned to practices, mostly for administrative reasons.

GPC chairman Dr Chaand Nagpaul said the GPC was concerned about the impact of intensive referral management on GPs and patients.

‘Many of these systems are costing far more than any potential benefits. But more importantly, they’re not facilitating education or clinical change,’ he said.

Devon GP Dr Anthony O’Brien called on NHS England to evaluate whether the centres offer value for money. He told GP he had seen no evidence that referral management made real savings from reduced hospital activity, and questioned whether the benefits were worth the costs.

‘These have grown up out of nowhere. If we are following evidence-based medicine, we should reflect on what they’re doing and whether they are worthwhile,’ he said.

An NHS England spokeswoman said it was for CCGs to assess the centres’ effectiveness.

Inside Commissioning blog: Referral management centres? We need a Centre for the Self-Improvement of Referral Decisions, says Dr Chris Mimnagh

GP practices 'may wish to seek individual HR and legal advice' on how to implement...

The Mote Medical Practice in Maidstone, Kent is looking for a salaried GP to work...

After choosing not to join a primary care network back in 2019, a popular Northumberland...

A Yorkshire GP has developed an online calculator that is helping practices to reduce...