More GP training posts have been filled this year in Scotland than at any time since the start of the decade, figures obtained by GPonline reveal.

A total of 322 GP training posts have been filled after two rounds of recruitment, figures from NHS Education for Scotland reveal - the highest number filled in a single year since 2010.

The figures, obtained exclusively by GPonline, come just days after the Scottish Conservatives claimed it was 'harder than ever to persuade young doctors to take up a GP training place'.

Updated information from NHS Education for Scotland reveals that 47 out of 72 GP training posts advertised in the second round of recruitment for 2017 have been filled.

A total of 275 out of 402 available posts were filled in the first recruitment round after two waves of advertising, taking the total number of posts filled to 322.

This is the highest number of GP training posts filled in a single year since 2010, when 349 trainee GPs were recruited.

The figures suggest that in the second year since the Scottish government extended the number of GP training posts in the country by a third to around 400, GP training programmes are beginning to attract more young doctors. 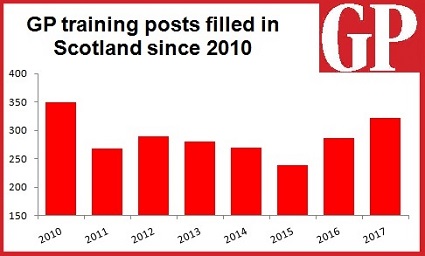 The Scottish Conservatives' statement on GP training places earlier this week was based only on data from the first round of 2017 GP recruitment in Scotland. The party's statement said that '275 of 402 GP training places have been filled after two rounds of recruitment - amounting to 68% of vacancies', but later clarified that this information related only to the two waves of advertising for round one of recruitment and 'excludes the figures for round two'.

GPC Scotland chair Dr Alan McDevitt said on Tuesday that 'not enough junior doctors are making the choice to train as GPs'.

Scottish health secretary Shona Robison said this week: 'This government has delivered record staffing levels and high funding for the NHS, increasing investment in GP services every year since 2007. Funding for general practice will increase by £250m by 2021 as part of our commitment to increase primary care funding by £500m.

'The number of GPs has increased by 7% under this government and Scotland continues to have the highest proportion of GPs per head in the UK. Over £71m in additional funding is being invested this year in support of general practice – as part of that, we’ve increased funding for GP recruitment and retention fivefold to £5m.

'We have increased GP training places from 300 to 400 and introduced £20,000 bursaries for harder-to-fill places. Indeed, in 2017 the number of GP training posts filled in Scotland is higher than at any point since 2010.'