Six in 10 GPs say that rationing of NHS treatments and services has worsened in their area over the past year, with up to half denied direct access to key cancer diagnostic tests, a GPonline poll suggests.

The majority of GPs (58%) have experienced an increase in local rationing of services over the last year, making it harder for them to ensure patients receive the treatment they need, a poll of over 700 GPs reveals.

As few as one in nine (11%) said access to treatments and services had increased this year, while a third (31%) reported that it had remained the same.

A number of GPs said they had been actively ‘discouraged’ from referring patients for certain crucial treatments, with one reporting they had been explicitly ‘asked to avoid orthopaedic referrals’.

Half of GP respondents said they did not have direct access to brain MRI scans, while 46% could not access flexible sigmoidoscopy – key cancer diagnostics GPs should have access to in order to follow NICE guidance.

The results suggest little has changed since a GPonline investigation last year revealed that half of GPs could not access these tests due to CCG-imposed restrictions. 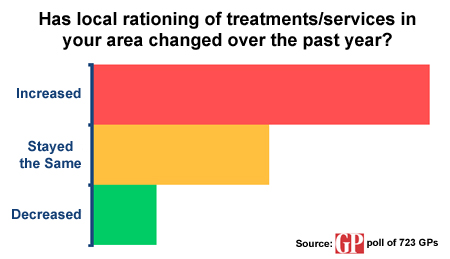 Many who do have access criticised ‘dangerously long’ waiting times, and warned that the number of rejections for ‘appropriate’ requests was on the rise.

One GP respondent said patients have an up to 18-month wait to see a gastroenterologist in their local area. Another said reasonable requests ‘often get rejected’, forcing them to refer patients multiple times.

One in nine (11%) cannot directly access non-obstetric ultrasound tests, while just 2% do not have direct access to chest x-rays.

Access to dermatology and mental health services have seen ‘huge reductions’, according to respondents. Some noted that the number of services requiring funding requests are on the rise, with individual approval increasingly required for tonsillectomy, benign skin lump operations and other minor surgeries.

An NHS England spokesman said: ‘The basis on which people receive NHS care – within the funds parliament makes available – should always reflect their ability to benefit from treatment.

‘The NHS strives to ensure we get maximum value from every penny available on behalf of patients, whilst encouraging a range of prevention measures for those circumstances where we can help people avoid getting ill in the first place.’