Practices will be hit by a 15% fall in QOF income next year as the government's overhaul of the framework and workload pressures bite, experts have warned.

Accountants say practices stand to lose £20,000 of QOF income as targets become harder to achieve in 2013/14.

The figure equates to a drop of about £8.8m across England, worth £1,100 to the average practice. 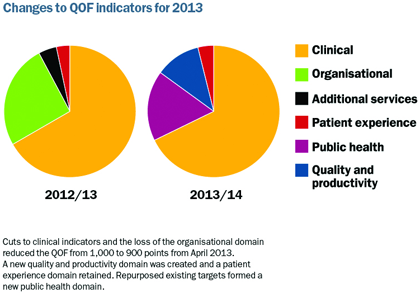 The organisational domain, which historically has seen high achievement rates, was scrapped and the cash used to fund new DES work. Tougher QOF thresholds were also introduced, among other changes.

An analysis by GP suggests that practices stand to lose 2.1% of QOF income as a result, even if they maintain last year’s performance levels in each domain.

Accountants have gone further and are telling practices to prepare for a drop of up to 15% in QOF income. The figure assumes practices will earn back QOF cash used to fund new DESs in 2013/14.

Jenny Stone, a partner with specialist medical accountants Ramsay Brown & Partners, said: ‘When we’re advising about drawings, we’re assuming a drop in QOF income. We’re expecting there will be about a 15% drop in QOF income for 2013/14.’

She said the estimate was a ‘worst case scenario’, but that practices needed to prepare.

Ms Stone added that many GP practices have been forced to consider which QOF targets to pursue this year as a result of the squeeze on overall income and rising workload. Some GPs are seeking alternative sources of income, including out-of-hours work, to maintain their profits, she said. 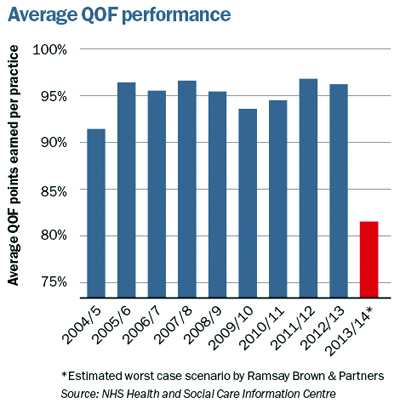 GPC chairman Dr Chaand Nagpaul said: ‘From the outset, we warned the government that the effect of the imposition would be to add workload onto an overstretched workforce and it would be difficult to achieve the same level in QOF.

‘I would not be surprised if achievement was lower this year, because that’s what we predicted. That’s why it was the wrong thing for the government to do. It put far more stringent hurdles into QOF.’

GPC deputy chairman Dr Richard Vautrey said: ‘At a time when there is an urgent need to invest in general practice to allow for increased recruitment and retention to deal with spiralling workload, the imposed contract changes have taken us in the opposite direction and made things considerably worse, not better.’

In November 2012, a GP survey found practices were forced to lay off practice staff who perform many of the clinical actions required in QOF as profits slumped.

GP practices will need additional resources to deal with long COVID as it starts...