Millions of pounds have been stripped from practice-run smoking cessation and contraception services and GPs fear further cuts by cash-strapped councils in April.

A GP investigation has found that primary care organisations (PCOs) across the UK withdrew swathes of public health-related local enhanced services (LESs) in 2012/13.

One GP expert feared councils could make further cuts when they take on public health in April. A sexual health charity said withdrawing funding for contraception services was ‘short-sighted’.

Although local public health services were cut, funding for the national NHS health checks scheme in England soared. The GPC called on CCGs to prioritise services for local needs and warned that funding only national schemes would ‘make a mockery’ of local budgets.

Data obtained by GP from 98 PCOs under the Freedom of Information (FOI) Act showed GPs faced large swings in LES funding in 2012/13. 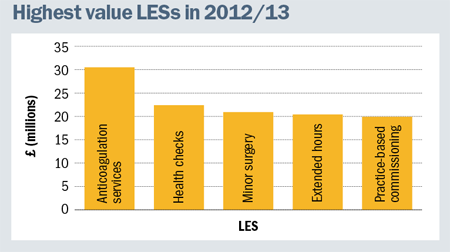 Further analysis of the data for 87 PCOs looked at trends within specific types of enhanced services and extrapolated these figures to reflect the national picture. This shows NHS health checks saw the largest growth in funding of any LES between 2011/12 and 2012/13, rising by £8.7m to £22.4m. Anticoagulation services rose by £3.9m to £30.5m.

But some services saw deep cuts. Funding for smoking cessation fell by £3m, or 28%, and spending on long-acting reversible contraception (LARC) services fell £2.3m to £17m, a loss of £1 in every £8.

Extended hours LES funding suffered the biggest fall of £19.2m, continuing the siphoning of cash away from the LES as the national DES was extended for another year.

The investigation also found LESs for acupuncture, aromatherapy, babies in prison, chiropractic and circumcision have been commissioned in recent years.

NHS health checks are the fastest growing LES, but are part of a national scheme introduced by the DH.

GPC negotiator Dr Chaand Nagpaul said it was ‘vitally important’ for CCGs and local authorities to prioritise the needs of their population ahead of national targets.

‘It would be doing patients a disservice if money was diverted from areas of need to meeting political targets,’ he said. ‘It’s a test of the government’s attempt to devolve decision-making to CCGs. If they are hamstrung to only fund central targets, it makes a mockery of the idea that CCGs are in charge of budgets.’

‘LARCs are among the most effective contraceptive methods and evidence from NICE clearly shows that they generate genuine cost savings for the NHS,’ she said. ‘Withdrawing enhanced funding to provide them is a short-sighted, expensive approach.’