Almost one in 10 GP practices have closed, merged or been taken over since NHS England became operational in April 2013, a GPonline investigation suggests, with small, underfunded practices hit hardest.

GP leaders say the scale of change in the profession is unprecedented, with practices serving 2.7m patients - just over 5% of the population of England - either closed, merged or taken over in just four and a quarter years.

Of 8,107 GP practices listed in NHS Digital data for April 2013, 750 (9.3%) do not appear in the latest figures on general practice - suggesting they have closed, merged or been taken over under a new contract type.

In data for July 2017, 7,411 GP practices are listed, 695 below the figure for April 2013. This figure is bolstered by 55 practices listed in the latest figures that were established since NHS England began - in some cases entirely new practices, but also existing practices that have switched to new ownership.

Practices that have closed or merged since NHS England took shape are generally significantly smaller and less well funded than the national average, investigation by GPonline reveals. 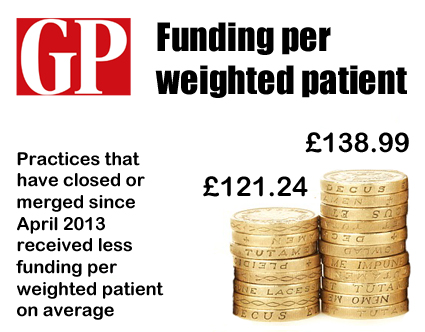 Meanwhile, average list size as of April 2013 for practices that have closed or merged since NHS England became operational was just 3,744, around half the 6,967 figure for all practices.

However, large practices were not immune to the pressures that have driven changes in general practice. A total of 26 practices with list sizes over 10,000 patients - including three with more than 20,000 - are among those lost since April 2013. 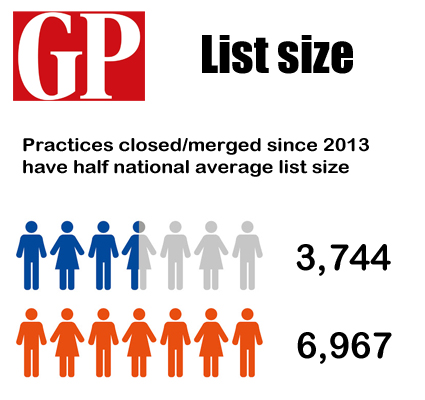 The total number of practices that closed or merged in the the NHS North region - with 223 practices in that part of England dropping off the list since April 2013 - was higher than in any other region.

The findings show that practices on PMS and GMS contracts were equally likely to close or merge over the past four years and a quarter. NHS Digital data for 2013/14 show that 43% of GP practices were on PMS deals, compared with 56% on GMS. Among practices that have disappeared since April 2013, the figures are almost identical - with 42% PMS and 58% GMS.

Dr Vautrey told GPonline that a 'significant part of the population had been affected by unprecedented change' to GP practices.

'There has been a significant reduction in the number of practices,' Dr Vautrey said. 'Closures have often come as a direct result of unsustainable financial pressures that individual practices have found themselves under. All practices are underfunded, and smaller ones are more vulnerable and that is often why they have closed.'

Dr Vautrey warned that being larger did not necessarily make practices sustainable, particularly with the profession underfunded as a whole, although he acknowledged that working at scale could help GPs support each other more and deliver some economies of scale.

But he warned that until the fundamental issue that core funding was failing to keep pace with increases in workload was tackled, practices of all sizes would 'remain vulnerable'.

The acting GPC chair warned that the strong connection between GP practices and their local community risked being lost amid such rapid change. Loss of continuity of care could also increase NHS costs and put patients at risk, he added.

'The change will have cost the NHS GPs too,' he said. 'It is an inevitable consequence that if you have invested your life into a practice and it closes, you are more likely to leave the NHS than continue in a different environment.'

An NHS England spokesman said: 'GP income varies greatly depending on the number of patients, their health needs and the services the practice provides but, as part of our plans to improve GP services, many practices are choosing to merge in order to offer patients a much greater range of services.

'By working together at scale practices benefit from greater efficiency, shared expertise, new ways of working and are able to employ a wider range of staff that benefits both GPs as well as patients.'

NHS England is exploring potential bespoke funding packages for practices with unavoidably small populations, and admits that a national funding formula will always struggle to address the needs of unusual practices.

Meanwhile, when plans emerged earlier this year for all practices to join 1,500 'superhubs' serving populations of around 40,000 patients, a DH spokesman told GPonline that it was not the government's aim to close practices as part of the transition, and that in many cases general practice could be grouped at this scale through collaboration.

A social enterprise is helping to train staff in GP practices to support women affected...

GPs remain in the dark over how a stop-gap offer from NHS England to pay off pension...

A group of LMCs has warned it 'cannot recommend' GPs sign up to revised plans for...

'A Hard Day's Night': a GP's musical reaction to the updated contract

The life of a GP can be incredibly busy, but that hasn't stopped one talented doctor...

Following weeks of uncertainty over the future of primary care networks (PCNs), reworked...