GP practices are continuing to take on new patients despite lacking the capacity to do so, a GP survey has revealed.

More than 90% of GPs and practice managers who responded to the poll said their practice was continuing to take on new patients, despite 43% reporting they lacked the workforce or premises capacity to accommodate them.

While the results of the survey are further evidence of the capacity crisis in general practice, they highlight how GPs are stretching resources to provide a service for patients. 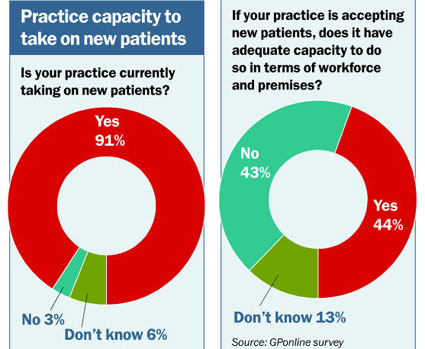 One senior GP said overcapacity was now so widespread that NHS England area teams were refusing to allow practices to close lists because neighbouring practices would be unable to absorb the increased demand.

Comments from respondents to the survey suggest some practices are continuing to take patients against partners' wishes because they are unable to close their list.

Practices that successfully apply to close their lists shut off one of the only methods of increasing income, by risking withdrawal of enhanced services.

The findings reignite questions over whether GPs should refuse to work beyond capacity.

Just 3% of the 526 GPs and practice managers who responded said their practice had stopped taking on new patients, although 6% said they had been forced to turn away patients who wished to register in the past year.

Practices not accepting new patients cited problems including inability to recruit staff, inadequate premises or being swamped with existing work.

Some GPs said they would close their practice lists if they could.

'Although struggling with workload, we have been told we are not allowed to close our list,' a GP partner in Huddersfield commented.

Another, in Lincolnshire, said he was also unable to close his list, while one GP commented that their practice faced financial penalties from the NHS England area team if they closed the list.

A GP in Lancashire said the practice had 'no option, even though we lack capacity' other than to accept new patients.

'The patients can't park, we can't store the notes except in cardboard boxes on the floor,' he wrote.

Others said they were unable to close their list because of a lack of alternatives for patients in their area.

Even practices unable to replace two or three retired GPs find it difficult to gain permission to close their lists, he said.

In many areas, every practice was working at capacity, and if one closed its list there would be a massive impact on the others, so area teams 'won't allow anybody to do so', he warned.

Dr Watson welcomed GPs working to ensure services continue for patients despite the pressures, but said more practices would close their lists if they were allowed to.

Local commissioners, he added, tried to help practices resolve capacity issues, but without additional resources, there is little they can do.

NHS England's standard operating procedure states that area teams must choose whether to accept applications to close a list and explain their decisions. Area teams considering an application should consult with anyone affected. Practices applying to close a list should tell the area team what measures they have taken to relieve problems.