Cuts to enhanced services across England will wipe out slim uplifts to GP contract funding agreed for 2011/12, a GP investigation reveals.

An overall 0.5% uplift to GMS funding was agreed for 2011/12, delivered through a 2.5% increase in the value of QOF points. But the cuts to enhanced services effectively wipe out this gain.

GP leaders described the cuts as 'lamentable' and warned they could threaten the DoH's Quality, Innovation, Productivity and Prevention (QIPP) savings targets.

Figures from 61 PCTs responding to a freedom of information request show total budgets for enhanced services - local, national and directed enhanced services - will fall by 2.2% in 2011/12. As a result, around £17.4 million will be stripped from practice income nationally this year. 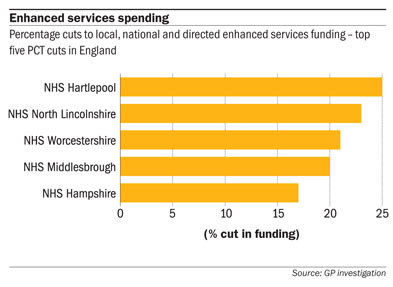 Earnings from enhanced services in the average English practice will drop by £2,400 - wiping out most of the £3,200 rise from QOF.

Some trusts admitted they were reviewing or cutting LESs to hit QIPP savings targets.

GPC negotiator Dr Chaand Nagpaul said the cutbacks were 'lamentable' and 'counterproductive'. 'PCTs need to invest in enhanced services to reduce demand and utilisation of secondary care,' he said.

John Ford, head of health policy and economic research at the BMA, said LESs were a 'soft target' for PCTs.

Many LESs have been decommissioned, including for child protection, diabetes, depression and weight management, the investigation found.

Services have been withdrawn from GPs and offered to other providers in some areas.

The findings came as data from the NHS Information Centre revealed GP funding had stalled in 2010/11.